In this COVID-19 crisis can we recognize we are one human family? Both Pope Francis and the UN Secretary General Call for a Global Cease-fire 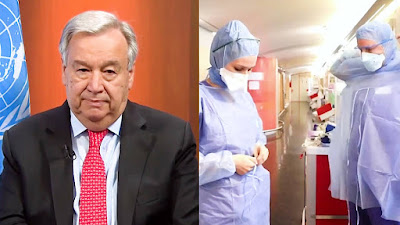 U.N. Secretary General calls for a global cease-fire
UPDATE: As of June 24, 2020, 170 countries of the world had signed on to the appeal for a global cease-fire from the U.N. Secretary General described below. Killing other human beings does not solve problems.
“Pope Francis issued two passionate humanitarian appeals on Sunday, March 29, 2020, in response to the coronavirus pandemic. First, he joined the U.N. secretary general in calling for the cessation of armed conflicts ‘in all corners of the world.’ Second, he called on governments worldwide ‘to avoid tragedies’ that could result from the spread of Covid-19 in overcrowded prisons. . . . . He prayed that ‘the common effort against the pandemic may bring everyone to recognize our need to strengthen the fraternal bonds as members of the one human family.’
“On Monday, March 23, U.N. Secretary General Antonio Guterres appealed to warring parties ‘to lay down their weapons.’ He said, ‘It is time to put armed conflict on lockdown and focus together on the true fight of our lives.’ In a message that was transmitted to a global audience by Vatican Media, Francis said, ‘I associate myself with all those who have accepted the appeal, and I invite all [parties in conflicts] to follow up on the appeal by stopping every form of warlike hostilities.’ He called on leaders to facilitate the creation of humanitarian corridors for aid, to open avenues of diplomacy and to attend ‘to those who find themselves in situations of great vulnerability.’

According to the 2020 report from the U.N. Office for the Coordination of Humanitarian Affairs, there were some 41 active armed conflicts over the last year, in places like Yemen, Syria, Libya, the Democratic Republic of the Congo and Venezuela. The global powers, including the United States and Russia, are involved in many of them.”  Read more in America Media


If you would like to stand with the Pope speaking for a cease-fire and signing in support of the message of the Secretary General, click here.    UN Secretary General António Guterres wrote,  "Let us take inspiration from coalitions and dialogue slowly taking shape among rival parties in some parts to enable joint approaches to COVID-19. But we need much more. End the sickness of war and fight the disease that is ravaging our world. It starts by stopping the fighting everywhere. Now. That is what our human family needs, now more than ever.”
To end the sickness of war, we need to disarm our hearts and start facing the truth.  Our greed and unreasonable fears are main things that fuel violence and war in the world.  Am I willing to face this truth, choose to live in simpler ways, learn to control my fears, and lessen the suffering in the world?
Start to learn from spiritual groups like the Catholic Nonviolence Initiative   or  Pace e Bene or Compassionate Integrity Training how to disarm our own hearts.  Start to learn from educational groups like World Beyond War how to face realities and abolish war. Do I understand the meaning of the word “security” or has my understanding been high jacked?
When compared to other countries, the U.S. has more COVID-19 cases and is very vulnerable. “The military occupation of the American mind has brainwashed Americans with strictly military concepts of ‘defense’ and ‘security,’ perverting federal spending priorities in the interest of war and militarism at the expense of all our country’s other vital needs, including the health of Americans.
Why can’t we just bomb the virus?
Of course, this question is ridiculous. But this is how U.S. leaders respond to every danger we face, with massive diversions of our national resources to the military-industrial complex (MIC) that leave this otherwise wealthy country starved of resources to tackle problems our leaders can’t pretend to solve with weapons and war. Depending what is counted as ‘defense’ spending, it accounts for up to two-thirds of federal discretionary spending. . . . . At the end of the Cold War in 1989, senior officials told the Senate Budget Committee that the U.S. military budget could safely be cut by 50% over the next ten years.  Committee chairman Jim Sasser hailed the moment as ‘the dawn of the primacy of domestic economics.’”  Have we in the U.S. chosen to do that so that people could have the security of food, housing, health care, education, and environmental protection? Read more.
This is the time that each of us could seek to disarm our hearts and disarm our countries and seek authentic securities, such as those laid out in the U.N. Sustainable Development goals.   Listen or read and learn from Pace e Bene.  Learn to be compassionate towards your self, towards others, and infuse compassion into our global systems, a way to authentic security, a way to peace.

We could seek to disarm our words. As Pierre Thompson writes in "We Must Resist the “War” on Coronavirus," we are invited to examine our rhetoric which may lead us in dangerous directions. “Being ‘at war’ requires us to accept a dualistic and confrontational worldview: winners vs. losers, allies vs. enemies, us vs. them.” The word war “stifles our empathy and compassion for other human beings.” Each of us can choose to use words that indicate the solidarity of the human family, that lead to the common good, and that unite us in nonviolent energy. We are not in a time of war, we are in a time of joining Dr. Martin Luther King, Jr.'s "Beloved Community."  We are in an era of joining the global circle dance of compassion.