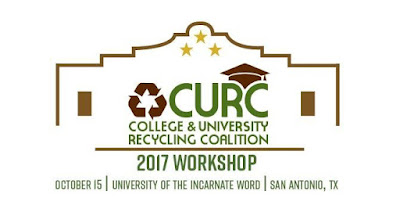 CURC, the College and University Recycling Collation, held their national workshop at the University of the Incarnate Word, October 15, 2017. Brian Roe, Pennington Biomedical Research Center at Ohio State University, spoke on “Food waste reduction / Collaborative planning for dining food waste.” A third of the food in the US is wasted. If students become aware, they waste less. Signs, apps, and teaching are among the successful reminders that can be used.

People shared many ideas from their schools. One said that when they have large events, they have “Trash Talkers” who stand near the bins and help people put things in the correct place for recycling. At the University of Oregon, during a past move out from the dorms, they have taken pictures of what has been thrown away. Now the school has a game where students are invited to identify what could be recycled. If they identify three things, they win a box to use for moving their things.

Sara Nichols, of the State of Texas Alliance for Recycling (STAR) gave information on Recycling in Texas and the Economic Impacts. STAR educates from “school children to senators” and she said with a laugh “Much of the content is the same!” She shared trends in recycling and packaging, why this is important, what is being done and what needs to be done. Lighter packaging is better. All need to work towards better ways of measuring progress in these areas. Corporations want to fund groups that are going in to make a change. Austin is the home of the universal recycling ordinances. Municipalities have much power to change things.

Nichols went on to explain that the US recycling rate has been stagnant at 34% for the last few years. Texas is recycling about 22%. Texas is huge. It is important. We have four of the ten fastest growing cities in the US. For every 10k going into landfill one job is created, while for every 10k recycled ten jobs are created. An average family of four spends $15,000 a year on food that is wasted.

Some of the San Antonio city goals are to recycle of 60% of single-family residential waste by 2015 and to improve recycling opportunities for businesses. The focus is on small and medium size businesses because many large businesses have already started. For example, H.E.B. does much recycling, especially with cardboard. ReWorksSA provides incentives, information, and other resources.

Jennifer Hobson, University of Texas, Austin, shared on Engaging student volunteers and cultivating institutional support for zero waste efforts. Generally students expect recycling all over campus. Any campus group can apply for funding for a recycling project. At UT Austin, they have had paper recycling since the 1990’s. She works with internal stack holders and supports and encourages them. It is expensive to put trash in the landfill, so that encourages interest in recycling. It is important to keep educating people on how much is saved and how much benefit there is. People do not realize this. Students need to have experiences, not just classroom learning. They work with leadership classes, and a project management class that designs things in the fall and implements them in the spring. They had 26 students working on 9 projects. Many are doing waste audits. They are working with the food service.

UIW participates in “RecycleMania” a competition of colleges and universities throughout the US to grow in skills of sustainability. A ceremony to recognize campuses involved in “RecycleMania” was held. Campuses that have a total number of 4.1 billion students are participating in the “RecycleMania” competition. The competition is really to raise student awareness and get them involved. This is not just about tonnage, but about understanding and implementing many aspects of recycling. A new category this year is the “Race to Zero Waste,” which involves taking an individual building on campus and intensively measuring how things are recycled. Agnes Scott College was the winner. Loyola Marymount University in Los Angeles got the grand champion awards for winning in a number of areas, including Diversion, Paper, and Corrugated Cardboard. All campuses were encouraged to start preparing for “Get the Game for 2018!” 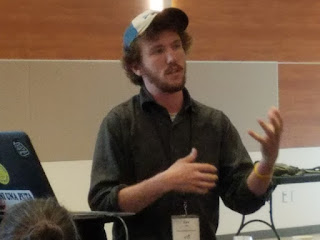 Alex Fried founder and director of PLAN, the Post-Landfill Action Network showed a picture of the relationships of issues. Recycling is important, but US society also needs to focus on patterns of consumption and consumerism. PLAN is a student-led zero waste movement. Students learn more and are equipped with the necessary skills and resources to implement solutions in their campus communities. This empowers students to be change makers.

Amy Preble, UNC Chapel Hill explained their Residence Hall Composting. In 2014 students in residence halls started this taking compost to the community gardens. Their dining rooms have compostable containers. As of 2017 fourteen residence halls have joined in participating. Have “Compost Kick-off” at the beginning of the year and students can check out a bin. Twice a week there is pick up. Many videos on campus composting are posted on YouTube. One of their many ways of communicating is “Green Games,” long standing student-led activities for other students to learn and participate.

Alyssa Halle-Schramm, Austin Community College, described their Paper Towel Composting. They do not have large dinning halls, but many grab and go cafes so that complicated trying to do recycling in these. ACC does have a Culinary Arts program and also a child development program and both of these are active in recycling and composting. For the last four years ACC has focused on recycling paper towels in bathrooms. This program is easy to pilot and easy to sell. An industrial compost companies picks up.

Students are considering what might be the best recycling mascot, what will help people learn and think

Bill Rudy, Brigham Young University spoke on Container Sensors. This campus has 32,000 students. Gardeners spend much time servicing garbage cans. A student developed a sensor that can be put into any bin and they can read how full the bin is. The gardeners only have to go there when the bin is full.

Deb Kutska, Oakton Community College in the Chicago area gave information on Improving Diversion. She started in 2014 as the first Sustainability professor. When she started the college had 19% recycling and now they have 36%. They have a goal to recycle 50%. They have about six Zero Waste events a year.

They created the “Talkin’ Trash Taskforce” to identify problem areas. They made a “sculpture” to make people think. At the Child Development Center, they recycle everything and the children easily learn to sort and do this.

The “Students for Social Justice” led a “bottle ban” initiative, and the campus now has this. Students can get water at the water stations, and not plastic bottles of water are sold on campus.

Lydia Vandenbergh, Penn State University, gave examples of their extensive studies on Bin Signage. They have an on-going effort to make things clear for all so that waste is not mixed or contaminated.

Scott Pasternak of Burns & McDonnell spoke on “Impacts on Recycling Commodity Values, Focusing on Contamination. He considered economic and market drivers. Dallas has a new recycling system. They have what seems to be one of the best glass recycling systems, which leads to “Super-Clean” glass. He offered some “Keys to successful campus, multi-family and commercial recycling programs:” Public education, convenient access, performance measures (how do you check), management buy-in, conduct waste audits and workshops for businesses to focus recycling programs.

Alex Antram, the Director of the Headwaters at Incarnate Word led a tour. Participants had an opportunity to tour recycling and sustainability sites on the campus, or visit the 53-acre Headwaters nature sanctuary located adjacent to the UIW campus. About half of the people attending direct university recycling services. Most of the visitors were from out of state and they praised the beauty of the Incarnate Word campus. UIW faculty attending felt renewed and inspired and want to further develop recycling .