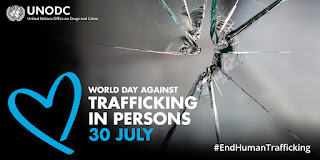 Human trafficking is a crime that exploits women, children and men for numerous purposes including forced labour and sex. Since 2003 the UN Office on Drugs and Crime (UNODC) has collected information on about 225,000 victims of trafficking detected worldwide. Globally countries are detecting and reporting more victims, and are convicting more traffickers. This can be the result of increased capacity to identify victims and/or an increased number of trafficked victims.
Every country in the world is affected by human trafficking, whether as a country of origin, transit, or destination for victims. Traffickers the world over continue to target women and girls. The vast majority of detected victims of trafficking for sexual exploitation and 35 per cent of those trafficked for forced labour are female. Conflict further exacerbates vulnerabilities, with armed groups exploiting civilians and traffickers targeting forcibly displaced people. Data also shows that trafficking happens all around us as the share of persons trafficked within their own country has doubled in recent years to 58 per cent of all detected victims, according to the 2018 UNODC Global Report on Trafficking in Persons .
In 2010, the General Assembly adopted the Global Plan of Action to Combat Trafficking in Persons, urging Governments worldwide to take coordinated and consistent measures to defeat this scourge. The Plan calls for integrating the fight against human trafficking into the UN’s broader programmes in order to boost development and strengthen security worldwide. One of the crucial provisions in the Plan is the establishment of a UN Voluntary Trust Fund for victims of trafficking, especially women and children. 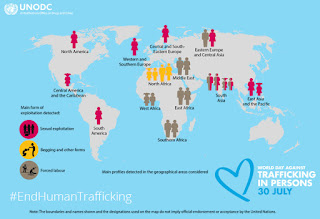 The Trust Fund facilitates effective, on-the-ground assistance and protection to victims of trafficking, through grants to specialized NGOs. It aims to prioritize victims coming from a context of armed conflict and those identified among large refugee and migration flows.
In 2013, the General Assembly held a high-level meeting to appraise the Global Plan of Action. Member States also adopted resolution A/RES/68/192 and designated July 30 as the World Day against Trafficking in Persons. This resolution declared that such a day was necessary to “raise awareness of the situation of victims of human trafficking and for the promotion and protection of their rights.”
In September 2015, the world adopted the 2030 Sustainable Development Agenda and embraced goals and targets on trafficking in persons. These goals call for an end to trafficking and violence against children; as well as the need for measures against human trafficking, and they strive for the elimination of all forms of violence against and exploitation of women and girls.
Another important development is the UN Summit for Refugees and Migrants, which produced the groundbreaking New York Declaration. Of the nineteen commitments adopted by countries in the Declaration, three are dedicated to concrete action against the crimes of human trafficking and migrant smuggling.
Human Trafficking: call your government to action
Despite many countries having national trafficking laws in place which are in line with the UN Trafficking in Persons Protocol, people continue to be trafficked. What is more, in many countries, victims may still be criminalized while the impunity of traffickers prevails.
Therefore, on the 2019 World Day UNODC is focusing on highlighting the importance of Government action in the interest of victims of trafficking. But the call to action is not only to Governments, we encourage everyone to take action to prevent this heinous crime. 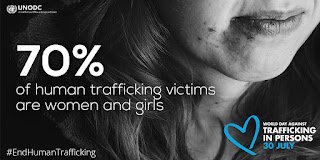 Traffickers and terrorist groups prey on the vulnerable, from people in poverty to those caught up in war or who face discrimination. Nadia Murad, the first trafficking victim to serve as a United Nations Goodwill Ambassador, was justly co-awarded the 2018 Nobel Peace Prize for galvanizing international action to stop trafficking and sexual violence in conflict.
Armed conflict, displacement, climate change, natural disasters and poverty exacerbate the vulnerabilities and desperation that enable trafficking to flourish. Migrants are being targeted. Thousands of people have died at sea, in deserts and in detention centres, at the hands of traffickers and migrant smugglers plying their monstrous, merciless trades.
But everyday indifference to abuse and exploitation around us also takes a heavy toll.  Indeed, from construction to food production to consumer goods, countless businesses and enterprises benefit from the misery.
Multilateral action has generated progress, including through the Palermo Convention and its Protocol to Prevent, Suppress and Punish Trafficking in Persons, Especially Women and Children. Most countries have the necessary laws in place, and some countries recently recorded their first trafficking convictions. But more needs to be done to bring transnational trafficking networks to justice and, most of all, to ensure that victims are identified and can access the protection and services they need.
The Sustainable Development Goals include clear targets to prevent abuse and exploitation, to eliminate all forms of violence against all women and girls, and to eradicate forced labour and child labour.  On this World Day against Trafficking in Persons, let us reaffirm our commitment to stop criminals from ruthlessly exploiting people for profit and to help victims rebuild their lives.
António Guterres