A Reflection on Racism and Sexism 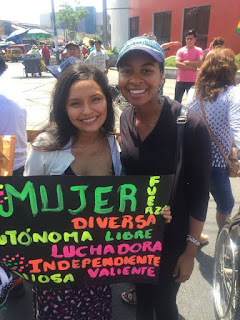 Wednesday, March 8th I found myself amidst a line of women, linked hand in hand in solidarity for women’s rights locally and internationally. We wore the color black to honor and remember those who lost their lives fighting for equality, representation, and justice. Additionally, we represented those in societies where women have limited presence outside of the traditional roles. As we looped around the Mercado Modelo and up towards the Plaza de Armas, I could not help but wonder where were all the other women in Chimbote? How does the struggle differ for Afro-Peruvian Women? and better yet how does my own experience as a Black Woman from the United States relates to the diaspora in Peru? Perhaps these questions do not have definite answers and maybe that is how it should be, for the vagueness leaves room for growth and improvement.
In conversations with Chimbotanos I often hear “We live in a machismo society.” This statement holds true in a consistent subtle manner. In the way that few women drive, men are not expected to contribute to the household besides providing income, and the domestic violence both physical and verbal that often goes unresolved, are just a few examples. Machismo, the strong and often aggressive masculine pride, is so rooted in the culture that often citizens do not realize that it is a problem worth correcting. Knowing that a female is unequal and treated more like an object rather than a whole person who deserves respect, can lead to complacency and jadedness if unable to find an outlet. The greater problem lies in when one has grown up in such a society that to consider an alternate way of living is beyond anyone’s imagining. However, that does not mean that all women are satisfied with the imbalance of power and willing to remain mute. I believe there is an undercurrent of dissatisfaction with the treatment of women both in Chimbote and even globally that has been made evident with campaigns such as “Ni una menos” and informational fairs encouraging women to speak up and step out of the abusive relationship.

Outside of the immediate context of Chimbote, the themes of racism and sexism touch women of color in Peru and the United States in parallel ways. As a Black American Woman raised in the land of freedom and the American Dream, the color of my skin and my gender automatically set me back from my peers. The moment I enter into the workforce my pay would most likely be less than that of my male counterparts and my features would not be deemed as beautiful but rather something to mock and change as a result of historical events. Recently throughout the United States, women of color have been making some headway with obtaining greater representation in the media and visual images. According to a Huffington Post article, Black feminists are pushing to be incorporated into the daily perception of beauty rather than as exocitic or appropriated. The movement initially focused on  reproductive issues, equality in health care prevention of sexual harassment, and other pertinent issues. However, Lindsay Hoffman, the writer, explains that “[today] the movement is pushing for the return of African-American women to African standards of beauty, as seen in the natural hair movement. In a society where only one type of beauty is celebrated, the Black feminist is working so that we not only call silky hair and light skin pretty but also coarse, kinky hair and dark skin.” TV shows such as “Scandal” and “Because of Jane” help to portray African American women who are intelligent, influential, and graceful. Opposed to the common “Angry black woman” or the “servant” stereotype. Thus improving the idea that Black woman can obtain high level positions and/or be educated. Fortunately, Black feminist are aiming to include voices of all minorities and to address the multifaceted nature of the woman.
The progress of the Black feminist movement has encouraged Latinas with African ancestry to unite by creating a label for themselves: Afro-Latinas. Unfortunately, media often omits or rather diminishes cultural diversity both within the United States and Latin America. The issue of colorism, which is privileging lighter skin over darker skin, within Peru specifically, creates a false reality that is then attempted to be made real via individual interactions and governmental legislation. From a CNN article commenting on the complexities of prejudice in Peru, the piece explains that “the country has socio-economic gaps along race lines and its inherent, if subtle, discrimination can mean an indigenous woman may only ever work as a maid; a black man may only ever aspire to be a hotel doorman.” In other words, fair skinned women with the ideal body type, following European beauty standards, are those who have the best entertainment roles, jobs, and overall societal treatment. Yet this ignores so many of those who have contributed to the country’s story. But as a foreigner, I did not want to force my experiences and understanding of racism to that of Peru’s. Therefore, out of curiousity I asked Peruvian women their perspective on racism and gender discrimination in Peru. 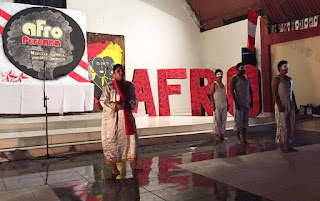 Initially, their responses invited me to think that racism does not really exist in Chimbote or Peru at large. Instead the use of words such as “Negra” and “Morena” are used to identify someone because of their difference just as one might say “Gorda” or “Flaca.” However from Afro Peruvians themselves, their experiences say otherwise. From a Youtube channel, Una Chica Afroperuana, two girls talk about comments they are tired of hearing. Comments such as, “eres bonita para ser negra/ you are pretty for a black girl” and “la mayoria de cosas negativas, lo vinculamos con el color negro/ the majority of negative things are described with the color black.” In other words, being black is associated to being not good enough and the very word has negative connotations. One has to wonder why hardly anyone says “you are pretty for a white girl.” These examples show that perhaps the racial discrimination may not be as apparent or oblivious as in the United States but it exists nonetheless.
If we follow the definition of the word “racism,” the belief that a particular race is superior or inferior to another thus determining cultural or individual achievement; then clearly Afro-Peruvian women are combating against more than machismo. Fortunately, their voices are beginning to be acknowledged. From a BBC article In 2010, Frecuencia Latina, a popular Peruvian channel, suspended a popular comedic character called El Negro Mama due to threat of legal action from Lundu, an African-Peruvian civil rights organisation led by Monica Carrillo. In 2012, an Afro-Peruvian woman became the first to win a racial discrimination case in Peru. Activist groups such as Ashanti Peru, based in Lima, make it their mission to strengthen Afro identity, leadership, human rights, and culture, locally and nationally.


Regrettably, women are still dealing with too many setbacks in today’s society, but if we choose to unite under dignity and love for one another, change is possible. With organizations such as La Casa de la Mujer, Lundu, and Ashanti Peru, the fight to continue uplifting women regardless of economic standing, cultural makeup, or skin color will persist. While keeping in mind women’s rights and equal representation. Thus, using International Women’s Day, not just a day to celebrate the power and beauty of women, but rather the reminder that yes, we have come along way, but we still have a long way to go! In the words of Bell Hooks, an American feminist and social activist, “The moment we choose to love we begin to move towards freedom.”