Responding to the Needs of the Immigrant Community

Responding to the Needs of the Immigrant Community
By Sr. Anne Marie Burke

When I returned from my ministry in Peru in January of 2015 the Generalate team invited me to discern where I could best serve in the U.S. After a time of discernment, I felt that God was calling me to minister to immigrants, especially to Latin-Americans since Spanish is my second language. 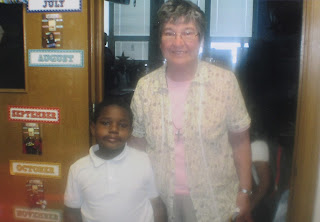 From March –May, 2015 I volunteered 2-3 days per week with the IWC (Interfaith Welcome Coalition) which the First Presbyterian Church coordinated in San Antonio. I served at the Casa Mennonite guest house where immigrants from the Dilley and Karnes City detention centers came for shelter until they continued to their destination.  Usually their stay was for a night or two. Hospitality, food, a place to rest, a shower, clean clothes, legal advice, health care, counseling service, transportation, communication with family and friends were offered.  RAICES (Refugee and Immigrant Center for Education and Legal Services) collaborated in the project in a big way. The majority of the immigrants were from Honduras, Guatemala, El Salvador and Mexico.

From March 15th to April 11th I volunteered in El Paso at the Nazareth Hospitality Center for immigrants coming from the ICE (Immigration and Customs Enforcement) retention center in El Paso.  Nazareth Hospitality Center is an extension of Annunciation House directed by Ruben Garcia. The volunteers worked on shifts: 7.00 a.m. – 2.00 p.m., 2.00.p.m. -10.00 p.m. and one volunteer stayed overnight in the center. The services offered to the immigrants were the same as in San Antonio and were more organized. The number of persons was bigger: 30 – 40 per night.  People came from Bolivia, Brazil, Cuba, El Salvador, Guatemala, Honduras. Mexico, Ethiopia. Most of the women had small children with them.

My experience at Nazareth Hospitality Center was a time to serve the people on their way to liberation. As I reflect on my experiences there I am aware of God’s loving care of the poor and suffering manifested in the caring volunteers, and how we participate in God’s redemptive love as we serve each other in solidarity.  I am humbled and thank God for all His blessings in our lives and for the opportunity to receive and share His love with others.

From May to June 2016 I joined Sister Cathy Vetter in St. Louis Mo. to see what possibilities of immigrant ministry were available. Cathy gave me some contacts and I visited various institutions and spoke with Sisters from different Congregations who minister to immigrants. In my discernment I chose St. Louis because the immigrants are settled there. 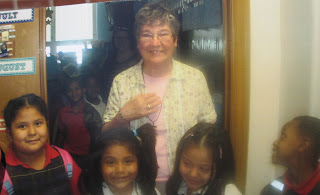 I went to San Antonio for my annual Retreat and I returned to St. Louis at the end of July and joined the CCVI Lumen Christi Community.  The beginning of August 2016 I started as a volunteer interpreter at the Casa de Salud clinic, and I was available for Mondays, Wednesdays and Fridays. I served there till March 2017.

In October, 2016 on Tuesdays and Thursdays 12.00 – 3.00 p.m. at Our Lady of Guadalupe School I started tutoring Kindergarten children who speak Spanish in their home. In April 2017 I started tutoring Monday – Friday till May 25th the last day of the school year. I will return in the middle of August when the new year begins.  On Saturdays I volunteer at St. Vincent de Paul Society Caritas thrift shop sorting clothes and putting them out on the racks. The income goes to help the Food Pantry. Many immigrants come to buy at the store.