Danger Did Not Drive Us Out of Peru


"These are our martyrs," said our Incarnate Word Sisters in Chimbote, Peru, as they showed us an image of three priests whose beatification ceremony they attended on December 5. These priests — Fr. Micael Tomaszek and Fr. Zbigniew Stralowski, Franciscans from Poland, and Padre Alessandro Dordi, from Italy —were murdered by the terrorist group, Sendero Luminoso, "the Shining Path," in 1991.
I was on my fifth trip to Peru as a teacher from the University of the Incarnate Word, San Antonio, Texas, connecting students and faculty with realities in Chimbote where our sisters started working after Pope John XXIII begged North American religious to go to South America to help meet the needs.
In the 1950s, Chimbote had been a popular resort and prosperous fishing port. Things changed as thousands of indigenous people immigrated there seeking a better life. Some got jobs in fishmeal factories, but eventually these led to overfishing. Air, water and soil were polluted by factories. Now Chimbote is one of the poorest and most contaminated cities in the country, with about 400,000 inhabitants, many of whom do not have access to water, sewage or electricity. According to Worldwatch Institute, life expectancy in Chimbote is about 10 years lower than the Peruvian national average.
Abimael Guzman, the leader of Sendero Luminoso and a former university philosophy professor in Ayacucho, said they wanted to help the poor. He taught that violence and terror were the only ways to destroy the governmental system in Peru and bring in a new communist model. They began bombings and assassinations in 1980. Church workers, who tried to protect the people or advocate nonviolent approaches to change, were considered enemies. 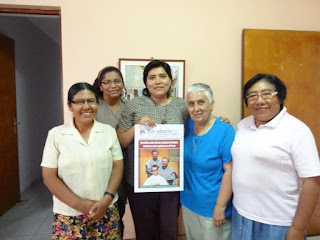 The martyred priests were working among the poor and trying to teach peace. Our Sr. Grace O'Mara, who actively spoke for justice and peace, received a death threat from the terrorists. Sr. Rita Prendergast reflected, "The violent methods of the terrorists overshadowed their claims that they wanted to help the poor." Sr. Sarah Lennon noted, "Often, those working for peace and justice [were] caught in the crossfire between terrorists and government forces."
I remember the late 1980s and the reports of thousands being killed in Peru. Some of us were saying to our sisters in Peru, "Come home. Come back to the U.S. and Mexico. You can minister here. We do not need you dead in Peru. The Incarnate Word Sisters can minister other places."
On August 9, 1991, the two Franciscans were killed in a village not far from Chimbote. Sr. Rosaleen Harold had collaborated on diocesan projects with Fr. Dordi. He was killed 16 days later and the terrorists left a sign on his body, "This is how those who speak of peace die."
Two months later, our sisters gathered for a special assembly in Peru to discern what to do as more people were being killed. They remembered how the first six Incarnate Word Sisters began ministry in 1964 in health care, education, and accompanying the most vulnerable. They opened the Santa Clara Center where they offered basic medical services and received hundreds of sick people per week during the many cholera, typhoid and yellow fever epidemics. In 1982 the sisters extended their mission to Cambio Puente, a nearby rural zone where they helped protect the rights of farmers and developed catechists, literacy programs, health promoters, centers to feed the needy and other services.
Three years later, the sisters began a mission among the Aymara-speaking indigenous people in the Puno area in the Andes. The sisters accompanied those with physical incapacities and did prison ministry, and they also promoted religious education. In 1988 the sisters began ministering in parts of Lima as houses were opened to welcome and teach Peruvians wishing to be sisters, as well as lay persons seeking to be associate members of the congregation.
In the 1980s as the congregation became more firmly rooted in Peru, the terrorist group Sendero Luminoso was spreading. Finally Guzmán was captured and imprisoned in 1992. About 70,000 people were killed during 20 years of conflict in Peru. In 2003, the Peruvian Truth and Reconciliation Commission reported that although the government reacted with excessive violence and there were other terrorist groups, about 37,800 people were killed by Sendero Luminoso led by Guzmán.
Sr. Juanita Albracht said that when Guzmán was in prison, Fr. Jack Davis, a good friend of our sisters in Chimbote, went to talk to him. Father asked why the priests were killed. Guzmán replied, "Because of their faith; they were teaching peace." Sr. Grace O'Meara explained that Senderistas believed that violence was essential in the revolutionary process and that religion was "the opium of the people."
Despite the dangers, our congregation chose not to abandon its mission in Peru. Sisters there argued that if they left the people's side, they might never have a chance to go back.
If we would have let the danger drive the sisters out of Peru, what difference would it have made?
In the Andean area, there wouldn't be lay pastoral leaders for the 150 small communities in their parish that has only one priest, leaders who were taught and encouraged by our first Peruvian Sr. Hirayda Blácido.
Hospicio Santiago Apostol, the first hospice in Latin America, which was started by our sisters in 2002, wouldn't be bringing a holistic approach of spiritual and physical care, as well as assistance to the patients' families. Sr. Mirella Neira is now the administrator of the hospice program with both home-based care and a residential center.
If the sisters had left, about 31,000 people would not have been served last year alone by the Incarnate Word Health System in Peru. Sr. Lourdes Gómez, a psychologist who works in mission effectiveness, guides over 70 lay collaborators in the clinic and hospice in the spirit and values of our congregation. She is also the coordinator of our sisters in Peru. Sr. Sofia Mamani, who sings beautifully in her first language of Quechua, is studying physical therapy.
In the Lima area, Sr. Mary Luz Cayo wouldn't be an early childhood teacher in San Viator School in Comas. We wouldn't have Carol Velarde Flores, our pre-novice, attending the inter-congregational formation program where women and men of over 20 congregations study. Sr. Katty Huánuco wouldn't be bringing her extensive skills in communications and her passion for justice as the director of our International Justice, Peace, and Integrity of Creation office. And we wouldn't have the opportunity to be proud of Sr. Pilar Neira, who is the executive secretary of CONFER, the national Peruvian organization of religious men and women.
If our congregation would have let danger drive us out of Peru, there would not be Peruvian Incarnate Word sisters, lay sssociate members, and lay missionaries from the U.S., Ireland, or Mexico volunteering for a year or two there, and over 70 lay collaborators working with them in the Centro de Servicios de Salud Integral Santa Clara and in the Hospicio Santiago Apóstol.

In the church yard of Cambio Puente people waiting for eye examinations; a woman, right, reads the eye chart on the tree that Dr. Jamie Matos is pointing to. (Martha A. Kirk)
If the sisters would have left, our 21-member university international service learning group, sponsored by the UIW Ettling Center for Civic Leadership and Women's Global Connection, wouldn't have had the recent opportunity to visit Peru. We shared workshops with early childhood educators and women trying to develop small businesses. We received information for pharmacy and nutrition collaborations in the future. We helped provide eye care to over 400 adults and children, many of whom had never had glasses before.
We were helping them to see, but more than that, they were helping us to see more of the beauty of the face of God that danger cannot dim.