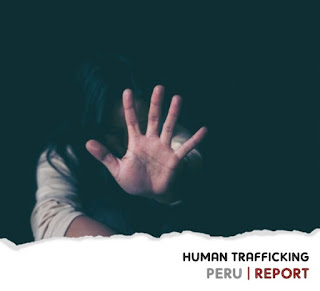 Communities located near illegal mining operations are often isolated and lack a permanent government presence, increasing the likelihood of illicit activity, including sex and labor trafficking. The high demand for commercial sex in these towns increases incentives for traffickers to bring in women and girls from various regions in Peru. Women and girls exploited in sex trafficking near mining communities are often indebted due to the cost of transportation and unable to leave due to the remoteness of camps. Tourists from the United States and Europe purchase sex from child trafficking victims in areas such as Cuzco, Lima, and the Peruvian Amazon. In the Loreto region, criminal groups facilitate transportation of foreign tourists by boat to remote locations where women and children are exploited in sex trafficking in venues on the Amazon River.

Peruvian men, women, and children are exploited in forced labor in the country, principally in illegal and legal gold mining and related services, logging, agriculture, brick-making, unregistered factories, counterfeit operations, organized street begging, and domestic service. Peruvians working in artisanal gold mines and nearby makeshift camps that provide services to miners are subjected to forced labor, including through deceptive recruitment, debt bondage, restricted freedom of movement, withholding of or non-payment of wages, and threats and use of physical violence Forced child labor occurs in begging, street vending, domestic service, cocaine production and transportation, and other criminal activities. The number of Venezuelan migrants, many of whom are vulnerable to exploitation, has increased significantly each year since 2016. Migrants from other parts of South America, China, and Senegal transiting Peru to Brazil were reportedly vulnerable to sex and labor trafficking, as were migrants along Peru’s southern border with Chile.

The Government of Peru does not fully meet the minimum standards for the elimination of trafficking; however, it is making significant efforts to do so. The government demonstrated increasing efforts by investigating and convicting more traffickers, increasing funding for law enforcement efforts, and implementing a new national anti-trafficking action plan. However, the government did not meet the minimum standards in several key areas. Poor interagency coordination continued to hinder victim identification and assistance. Many ministries reported they did not have adequate funding to fulfill their anti-trafficking mandates. Complicity of some government officials undermined efforts to combat trafficking, but the government only reported one ongoing investigation of a complicit official in 2017.

Police reported conducting 865 anti-trafficking operations in 2017 (764 in 2016), resulting in the arrest of 410 suspected traffickers (427 in 2016). The public ministry’s anti-trafficking unit reported participating in 122 anti-trafficking operations and investigating 228 suspected traffickers’ cases. The government did not report comprehensive data on the total number of prosecutions initiated, convictions obtained, or sentencing information for trafficking offenses in 2017. However, the public ministry reported its trafficking-related prosecutions resulted in 50 court decisions in 2017, compared with 18 in 2016.  The MOI’s overall anti-trafficking budget increased to 7.5 million soles ($2.3 million) in 2017, from approximately 826,000 soles ($255,250) in 2016, the majority of which it spent on police hiring, operations, training, and equipment. Nevertheless, poor communication and coordination between police and prosecutors sometimes compromised efforts to identify and assist victims and investigate cases, especially during law enforcement operations.

The government maintained weak victim protection efforts. Most victims continued to lack access to specialized services. The anti-trafficking law (law 28950) required the government to assist and protect victims by providing temporary lodging, transportation, medical and psychological care, legal assistance, and reintegration assistance, although the government did not fulfill this mandate. Peru’s anti-trafficking law and implementing regulations assigned responsibility to several ministries, as well as regional and local governments, for identifying suspected victims among the high-risk populations they served and referring them to appropriate authorities, but government capacity and some local officials’ understanding of trafficking was limited and hindered victim identification and assistance. The MOI attempted to address these capacity gaps by providing training for officials, police, and service providers on victim care and protection protocols. Police reported identifying 1,229 suspected victims in 2017, compared with 1,134 identified in 2016, though this number could not be verified. Of these, 1,155 were female and 74 were male; 302 of the total were children.

The Ministry of Women and Vulnerable Populations (MIMP) was responsible for coordinating and providing services to victims in partnership with regional governments, although confusion over whether the national or regional government was ultimately responsible for service provision at times hampered victim assistance. The public ministry’s program for victims and witnesses assisted 521 trafficking victims in 2017, compared with 437 trafficking victims assisted in 2016. The government operated two shelters, in Lima and Masuco, exclusively for trafficking victims, with a total capacity of 28 beds. While the government operated 48 residential centers for children and adolescents, staff in these shelters lacked the expertise and resources to provide adequate protection services to trafficking victims. Many civil society organizations operated shelters or provided other services for victims without government support, although few offered trafficking-specific services.

The government dedicated 11 million soles ($3.4 million) to its anti-trafficking activities in 2017, an increase from 5.6 million soles ($1.7 million) in 2016. However, although several key ministries, including MIMP and MOI, had funding specifically for anti-trafficking activities, most government agencies did not have dedicated anti-trafficking budgets. Officials noted this lack of funding significantly impacted ministries’ ability to implement their duties as outlined in the national action plan, especially victim protection efforts. The government had a separate commission, inter-ministerial protocol, and plan for combating forced labor and child labor, which included greater oversight of employment agencies and strengthened response mechanisms to suspected forced or child labor.