Our Congregation, the Sisters of Charity of the Incarnate Word, first published our opposition to the death penalty in all cases and under all circumstances on June 8, 1998.

Our congregational commitment to promote and protect human dignity compels us to denounce the death penalty. We believe that capital punishment is inconsistent with the Christian belief in the sacredness of human life.

The death penalty is violence condoned by the state that contributes to the climate of violence and is not an effective impediment to crime.

This corporate stance against the death penalty testifies to the mission of the congregation. and it allows us to add our voice to that of other religious groups of all denominations that have expressed their public opposition to the death penalty.

It is worth mentioning that Pope Francis has authorized a change in the Catechism of the Catholic Church regarding the death penalty and announced it during the October 2017 meeting that commemorated the 25th anniversary of the last Catechism. "However serious the crime, the death penalty is inadmissible because it threatens the inviolability and dignity of the person."

The new wording includes this request of the Pope and ensures that, from now on, the Church "commits with determination to the abolition of the death penalty throughout the world."

We will continue to pray and act against the Death Penalty because taking a life is never a solution to reduce crime or punish offenders. 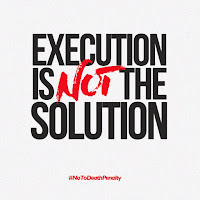