By Yael Garcia-Torrescano LOGOS STAFF WRITER   (From the Logos, September 2017. Used with permission) 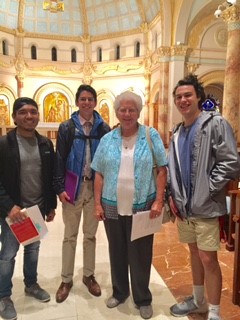 The Sisters of Charity of the Incarnate Word remembered a sister's life of service on the 30th anniversary of her murder Sept. 27.

Students in the Social Justice Leadership course – primarily Cardinal Community Leaders – along with others, gathered in the Chapel of the Incarnate Word for the observance titled “Reflection on the Murder of Sister Patricia Ann Kelley: Standing Against the Death Penalty.”

Kelley was raped and strangled to death, according to news accounts of her murder in St. Louis.  She was a graduate of Incarnate Word Academy in Bel Nor, MO, and earned bachelor’s and master’s degrees in religion from then- Incarnate Word College (now the University).

Kelley’s legacy included being regarded as an exemplary teacher, service as the Sisters’ vocation counselor, time spent as a probation officer, and a volunteer organizer.

In 1981, Kelley secured a grant to start the Dollar-Help and Energycare project in St. Louis which aimed to help low- and fixed-income elderly who couldn’t afford to pay their utility bills. When funding was ended after two years, she worked to make Energycare an independent, nonprofit organization, serving as its executive director. 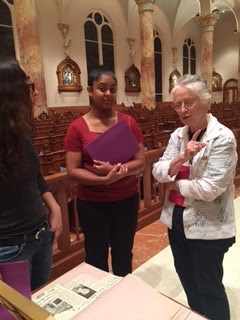 Between 1983 and 1987, Laclede Gas helped Kelley raise $1.5 million for the Dollar- Help project. In 1984, Kelley was the first woman to be awarded with the St. Louis Globe-Democrat’s Humanitarian Award, and later even called the “Mother Theresa of St. Louis.”

Kelley was found murdered in her Energycare office on Sept. 28, 1987. Nearly a year went by before St. Louis charged Jerry Lee Little, who was later convicted in Kelley’s death as well as three other women.

Sister Martha Ann Kirk, a longtime religious studies professor at UIW, shared memories of Kelley when both were students here, living on campus.

“I loved to be around her because she was fun,” Kirk said. “She would make you laugh! She would just dive-in into doing things, and you would have a good time with her.”

On a typical Sunday afternoon, Kirk recalled Kelley would ask, “ ‘Who wants to come with me?’ We need to be taking some joy to the soldiers that are in the hospital (referring to Brooke Army Medical Center).” 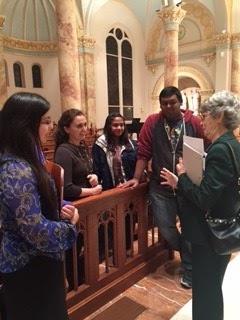 Kelley’s brother wanted Little executed but the Sisters of Charity of the Incarnate Word wanted imprisonment as the maximum penalty because he was dangerous. Not only did the order believe Little’s family had suffered enough but they believed the death penalty wasn’t going to make things better.

The late Sister Dorothy “Dot” Ettling, then-congregational leader of the order, said: “Such violence will never be conquered by a retaliation of violence in our own hearts.”

Kirk, a member of the Incarnate Word Sisters Justice and Peace Committee, said she remembers lobbying against the death penalty, because the sisters believed in the dignity of the human life.  “Our faith teaches us that every human life has dignity and the death penalty disrespects the dignity of creatures that God has made,” Kirk said.
Publicado por Jennifer Reyes Lay en 11:15 AM 0 comentarios

We must choose between the violence of adults
and the smiles of children.  - Elie Wiesel 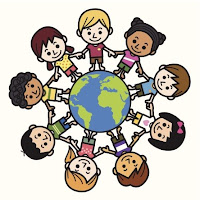 Who doesn’t enjoy seeing the smiles of children? But far too many children are not smiling. They’re not smiling because they live in a world of violence caused by adults who make war and weapons, adults who terrorize innocent people with speeding vehicles and deadly guns, adults who strike those with whom they disagree and curse those who look different from themselves. Children see this “adult” behavior and fear it, but they also learn to imitate it whether they see it in person or in the media, whether they hear it on the streets or in music.

Soon it will be the season of gift-giving, whether you are celebrating Christmas, Chanukah, or Kwanzaa, a time to celebrate light, love, and peace. It is one of the best times to bring smiles to children’s faces. But how do we do that if we perpetuate the violence not only in our words and deeds, but also in our gifts? How do Christians commemorate the birth of the one we call Prince of Peace if the gifts we give encourage conflict and competition? How do Jews commemorate the divine miracle of lasting, light-giving oil if the gifts we give promote the dark side of human behavior? How do African Americans celebrate family, community, and culture if the gifts we give divide people into enemies instead of friends?

When you choose gifts for the children in your life, please keep these questions in mind and consider toys that:
v  Promote respectful, non-stereotyped, nonviolent interactions among children
v  Can be used in many ways
v  Allow children to be in charge of the play
v  Appeal to children at more than one age or level of development
v  Are not linked to video games, computers, TV, or movies,
v  Can be used with other toys for new and more complex play
v  Will stand the test of time as children develop new interests and skills
v  Help children develop skills important for further learning and a sense of mastery
v  Can be used alone or with others
v  Can be enjoyed by boys and girls

Thanks to www.truceteachers.org for the information presented in this flier. Visit their website, as well as www.responsibleshopper.org, and www.greenamerica.org for more ideas about gifts that promote the positive values we want for our children and have the extra benefit of being sweatshop-free and non-toxic.

We encourage you to reproduce this leaflet


and share it with others.
Publicado por Jennifer Reyes Lay en 11:05 AM 0 comentarios 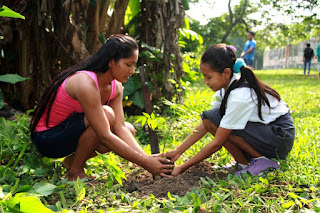 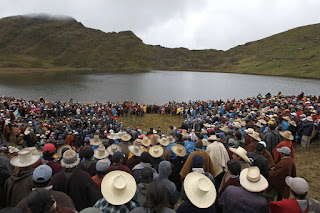 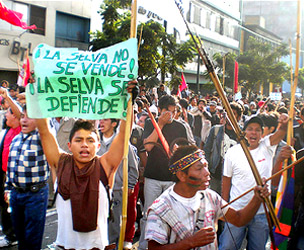 Should you ask an American what they know about Peru, you will most likely get the following common responses: Cusco, Incas, llamas, Cuy and the Amazon. Not many can go into detail about any one of the topics mentioned. Yet, tourism is a huge economic gain for Peru, if not specifically for the cities and communities that receive the tourist. With that said, it is the Andean and Amazonian culture that intrigues and fascinates tourists from all around the world. As a result they travel to Peru. However, within Peru there are a lot of paradoxes surrounding those communities. How is it that outside of the country they are sort of glorified and marveled for their traditions, yet within the country there is a lack of equal representation and ridicule? This question brings up the topic of ‘Human Rights’.

By very definition “human rights” is a right belonging to every justifiable person. There is an international human rights day celebrated every year on December 10th. Yet, that definition seems a bit vague . So let’s break down those two powerful words. As human beings, we have the right to live in a safe environment, to have freedom, to be protected by the law, and so on. So if we all have these rights, why is it that Indigenous groups in the Amazon (for instance) struggle to have them recognized?

News outlets such as The Guardian and TeleSur both have written articles detailing the recent events concerning Indigenous People vowing to block the oil agreement with Canada in the Amazon unless their Indigenous rights are respected. Their struggle for justice and proper legal representation is nothing new to the Peruvian government nor Human Rights activist around the world. Be it environmental issues or oil, to name a few, Peruvian Indigenous groups have faced discrimination and a slew of human rights abuses. Perhaps this treatment is due to location and/or historic relations, but that does not excuse the mistreatment by the state. Now they have had enough.

Tribal leaders from around the area of Peru’s largest oil field and coming from the four major river basins are fighting back. They want justice. According to The Guardian, “The [...]consultation law, passed in 2011 in Peru, requires the government to seek free, prior and informed consent from indigenous people before approving any development plans that might affect them.” This is an important document that the Indigenous groups desire because it allows their perspectives and maybe knowledge of the land to be taken into account concerning their living environment. Sandi, one of the representatives living in the four river basins says that without the consultation they will not allow oil companies to enter their territory for the following 30 years. Their fight for representation, proper use of their environment, and recognition of their human rights is an admirable one. Unfortunately, the state did not give the Indigenous communities exactly what they asked.

Though they have not yet received their ask, their fight and courage to speak out against the injustice has made news everywhere. In other words, the stand for human rights continues. We all can learn from this case just by recognizing the persistence and diligence showed by Indigenous leaders and representatives of the Amazon. In today’s society, we hear more stories of human rights violations compared to citizens and communities fighting to uphold their rights. These Amazonian Indigenous groups are prime examples that to obtain justice may not be easy but it is a human right and should never be overlooked.