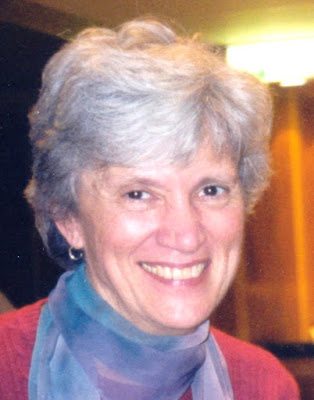 Sister Dorothy Ettling, Sr. Dot, became a transformative educator. She grew up in St. Louis, Missouri, entered Incarnate Word Convent in San Antonio when she was 18, took vows at 21, and ministered in orphanages and schools from 1961 to 1974 in Dallas, TX; El Paso, TX; and Old Mines, MO. She had earned an MSW at Worden School of Social Work at Our Lady of the Lake College.

The Second Vatican Council 1962-65, was a major event in the Catholic Church that shifted emphasis from clergy as the main part of the church to the people of God, all united through baptism.  Religious congregations were called to renewal. The Incarnate Word Sisters took this call to conversion seriously and had a Renewal Team from 1974 to 1978. Sr. Dot was among the six sisters who were to help all learn to communicate and transform power structures. That team went around in a station wagon from convent to convent, from country to country. They invited each sister to listen on a deeper level, to get in touch with her own story, to share her story, and to listen to each other stories. As we know ourselves, as we know others, as we overcome fear, we can work to transform power dynamics. This is an ongoing unfinished process.

In 1978, she was elected to the sisters’ leadership team and from 1984 to 1990, she led the team.  The congregation had about 700 members at that time. As a part of the Leadership Conference of Women Religious, she influenced Sisters in many parts of the U.S. in renewal after the Second Vatican Council that brought greater service to people. When she was being interviewed in 1987, she said, “Today we are closer to the people and our orientation leads us to concern ourselves more with social justice and to defend their rights. Among us [the sisters] our relations  have changed  also. We live more by collegiality and the sharing of responsibility, something that has not always been understood by the Roman Congregation [formal Roman Catholic clergy in the Vatican].”   (Ettling, French article, 1987, CCVI Archives) She was always aware of the most vulnerable.

After congregational leadership, instead of returning to social work, she focused on getting a Ph.D. in Transpersonal Psychology at Sofia University, Menlo Park, CA, and facilitating change. In the late 1990’s she joined the Education faculty at Incarnate Word. In this “third career,”  she perceived education as the best way for her to promote individual transformation and systemic change.

Many kinds of work are needed, but at this time in the history of world transformative education is particularly important.  The United Nations Sustainable Development Goals , the Charter for Compassion, and Pope Francis’ document on “Out Common Home,” Laudato Si are all meant to be transformative education inviting us to new realities. Women's studies are a part of this.

Dr. Alfredo Ortiz notes: Sister Dot’s participatory worldview provides a deep philosophy for participatory and action research.:   “Openness to cosmic awareness is the capacity for ongoing critical reflection on one's own deeply held beliefs within an evolutionary consciousness. It calls us to recognize not only the multiple worldviews in a global community but also the possibility of rediscovering reality in the paradigm of a participatory universe. This capacity may challenge us to rethink the meanings of development and participation. It will most likely entail a stretch in our thinking and in our teaching so a new intellectual basis in transformative education can collaboratively emerge”.    (from  Ethical demands of transformative learning )

Sr. Dorothy had written “At its core, the mission is about  transforming us from VIEWERS of a disconnected and conflicted international reality, to PARTICIPANTS in creating a more interconnected and responsive global community."

Background of Sister Dorothy's work
A group of immigrant women strongly committed to solidarity with God’s global family responded to needs and formed relationships in 1869. Over the years the women institutionalized more and more, eventually being central animators in both educational and health care institutions.  As they received accreditation to be a junior college in 1919 and soon a full college, they emphasized equity in education. The Incarnate Word Sisters’ constitutional idea to “promote human dignity” has prompted them to an underlying commitment to systemic change.  For a period of years the largest number of Hispanic women who earned Ph.D. came from Incarnate Word College and Our Lady of the Lake College.  When UIW firmly established Ph.D. programs, a large number of Black women earned them.

Following this trajectory of emphasis on systemic change in society, institutions, and in education, in the early 2000’s UIW faculty brainstormed with Sr. Dorothy Ettling how to create a more just world. Both males and females involved defined and committed themselves to women and children as the more vulnerable in the world. Women’s Global Connection was founded and since 2003 has extensively promoted education and research that could transform unjust systems. WGC hosted two major research conferences. The website of WGC shows some of the research with links to dissertations and extensive articles.

Dr. Kevin Vichcales and Sr. Dorothy co-edited a book Reach Out Africa: Studies in Community Empowerment, Sustainable Development, and Cross-Cultural Engagement. Unfortunately she died before the final release of the book.

These can be found by searching the UIW library resources using her name:

Improving Teaching Through A Community of Practice

Teaching for change : fostering transformative learning in the classroom

Series: New directions for adult and continuing education, no. 109

... and collaborating with women who want to become change agents in their own lives. Building on previous studies where women shared their stories of personal change (Ettling 1994...

The Joy of Learning: A Case Study of a Transformative Educator and Activist

Dr. Dorothy, “Dot,” Ettling was a contemplative practitioner, a spiritual leader, a scholar, and a mentor...

Worldview of Sister Dorothy in some of her personal actions:

When she died, the Pax Christi Vow of Nonviolence was found in her manual, the traditional place that IW Sisters keep papers about their vows.

Over Thanksgiving Weekend, 1975, she, Ada Maria Ada Maria Isasi Diaz, Sr. Mary Walden, an Ursuline Sister, and Sr. Martha Ann Kirk drove to the first Women’s Ordination Conference in Detroit. They returned to their ministries and continued to raise questions on how women might be recognized created in the divine image. They thought of this in solidarity with United Nations goals of gender equality.

To enter the 2000’s she, Sr. Neomi Hayes, and Sr. Martha Ann Kirk participated in “Millennium 2000, Walking the Ways of Peace,” an Inter-faith retreat with about 500 people including Fr. Daniel Berrigan, SJ, Dec. 28 to Jan. 1, 2000. She was among those choosing to participate in civil disobedience at the Nevada Nuclear Test site. She incarnated her words seeking a peaceful world by being arrested in the first hour of the new millennium.

She, among both San Antonio and Houston Incarnate Word Sisters worked towards women’s empowerment through a website Women’s Place.  She with her close friend Sr. Neomi Hayes  gathered UIW female and male educators and others to envision a way to promote  systemic change. The group defined and committed themselves to women and children as the more vulnerable in the world. Women’s Global Connection was founded in 2003. See a glimpse of this history within ideas of engaged scholarship and service learning at the University of the Incarnate Word.  She promoted Women's Studies. 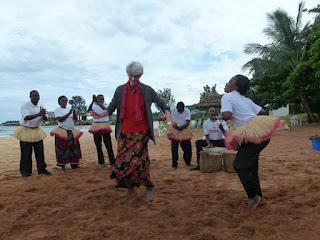 Sr. Dot dancing on one of the Women's Global Connection trips to Africa. See more about research and service learning in Africa and in Peru https://wgctravelblogue.wordpress.com/about/