The Leadership Conference of Women Religious shares the disappointment of millions of people across the country who hoped and prayed for relief from the fear and anxiety that is the fruit of this country’s broken immigration system.

Deferred Action for Parents of Americans (DAPA) and expanded Deferred Action for Childhood Arrivals (DACA) promised temporary relief to millions of parents living in fear of deportation and children who worry that their parents could be taken from them at any moment. It offered the chance for more young people to contribute more fully to their communities. President Obama’s executive action was a common sense path to stability for families, communities, and local economies and a reaffirmation of the values upon which this nation was founded.

The Supreme Court’s split-decision allowing the lower court injunction to continue to block relief is not only disappointing, it threatens to divide families and further splinter communities.

Catholic sisters have a long history of accompanying the immigrant community. They continue to minister to these aspiring citizens in schools, hospitals, and service agencies along the southern border and across the country. They see the devastating effects of the current immigration system every day in as they minister to families and border communities.

“As women of faith, we take seriously the gospel command to welcome the stranger and care for those in need. Catholic sisters came to these shores as immigrants to serve immigrant populations. We know the suffering of families torn apart by needless deportations,” said Joan Marie Steadman, CSC, executive director of LCWR.

LCWR and its members will continue to press for relief for families, an end to needless deportations, and the closure of all family detention centers.  They will continue to advocate for bipartisan legislation that protects the dignity and human rights of all people; creates an achievable pathway to citizenship; fixes the immigration visa system and reunites families; protects the rights of all workers; promotes the full integration of newcomers; respects the special needs of the most vulnerable; and addresses the violence, persecution, and poverty that force migrants from their homes.

At least 185 Environmental Activists Killed in 2015

Environmentalism has never been more dangerous. According to findings published Monday by the NGO Global Witness, 2015 marked the bloodiest year on record for environmental activists and land defenders. At least 185 environmentalists in 16 different countries are known to have been murdered, according to the group—a rate of more than three a week.

The figure represents a 60 percent increase over 2014's death toll. And those are just the murders we know about. Global Witness says that number may actually be a significant underestimate. The true number could be "far higher," since many such killings happen deep within rainforests or in remote villages and are difficult to document.
Latin America and Southeast Asia suffered the brunt of the slayings, with Brazil (50), the Philippines (33), and Colombia (26) sustaining the greatest losses.

Nearly 40 percent of those killed came from indigenous communities, according to the report. Groups that attempt to resist development and land expropriation in resource-rich areas are particularly vulnerable. In the Mindanao region of the Philippines, a largely indigenous region flush with coal, nickel, and gold, 25 activists were murdered in 2015. The violence carries global implications—according to the IBON Foundation, foreign industries control 97 percent of all mineral production in the Philippines.

Perhaps unsurprisingly, few of these murders are ever prosecuted in court, or even investigated. According to the report, "Many authorities either turn a blind eye or actively impede investigations into these killings due to the collusion between corporate and state interests—the principal suspects in these murders." Based on available data, Global Witness determined that killings were almost equally likely to occur at the hands of paramilitary, army, police, and private security. Felipe Milanez, former deputy editor of National Geographic Brazil, told the Guardian that "killing has become politically acceptable to achieve economic goals" and that he had "never seen, working for the past 10 years in the Amazon, a situation so bad."

Slumping global commodities indices may give one partial explanation. The report cites economist Ademar Ramos of the State University of Campinas in Brazil, who argues that plummeting commodity prices and access to cheap oil have actually led to companies expanding their extractive practices and taking on greater risks in order to recoup lost profits. Coupled with an eroding regulatory climate in places such as Peru and Brazil, business interests have run roughshod over preexisting land tenure practices and in some case have targeted dissenters.

Mining, agribusiness, logging, and water rights were the four industrial sectors mostly explicitly implicated in this wave of violence. Mining—for tin, coal, copper, silver, and gold—was linked to 42 murders. Agribusiness was linked to 20 known murders. Expanded logging activity was linked to 15 killings. And hydroelectric dam initiatives in Central America were linked to another 15—not including the high-profile assassination of indigenous Honduran activist Berta Cáceres, a Goldman Environmental Prize winner and dam opponent who was shot in her home in March 2016.

Aboard the Papal Plane (CNN) Pope Francis said Sunday that Christians owe apologies to gays and others who have been offended or exploited by the church, remarks that some Catholics hailed as a breakthrough in the church's tone toward homosexuality.
"I repeat what the Catechism of the Catholic Church says: that they must not be discriminated against, that they must be respected and accompanied pastorally," Francis said at a press conference aboard the papal plane returning from Armenia.
"The Church must ask forgiveness for not behaving many times -- when I say the Church, I mean Christians! The Church is holy, we are sinners!"
As he often does during unscripted moments -- particularly papal news conferences -- the Pope spoke expansively, saying the church should seek forgiveness for a number of historical slights committed in its name.
Groundbreaking Moment
"I believe that the church not only should apologize to the person who is gay whom it has offended," he added, "but has to apologize to the poor, to exploited women, to children exploited for labor; it has to ask forgiveness for having blessed many weapons."
The Rev. James Martin, a Jesuit priest and editor at large of America magazine, called the Pope's apology to gays and lesbians "a groundbreaking moment."
"While St. John Paul II apologized to several groups in 2000 -- the Jewish people, indigenous peoples, immigrants and women, among them -- no pope has ever come close to apologizing to the LGBT community. And the Pope is correct of course. First, because forgiveness is an essential part of the Christian life. And second, because no group feels more marginalized in the church today than LGBT people."

Our solidarity with our Mexican brothers and sisters

The Congregational Justice, Peace and Integrity of Creation Office of the Sisters of Charity of the Incarnate Word express our solidarity with our Mexican brothers and sisters in light of the recent attacks in Nochixtlán. We call for building bridges of dialogue and an end to the violence.
We invite the entire congregation to join in prayer for an end to the repression and that true dialogue can happen. 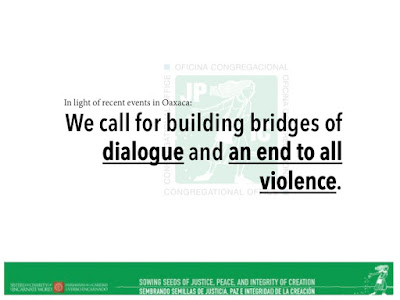 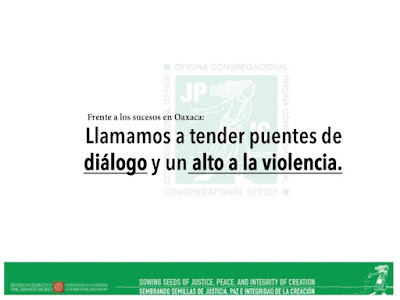 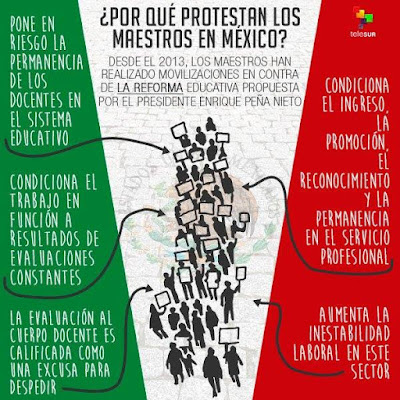 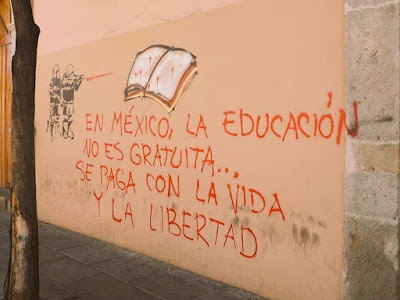 On May 27, 2015 the Congregation of the Sisters of Charity of the Incarnate Word held a communal prayer service and published our Corporate Stance Against Human Trafficking.  And then on June 14, 2015 Pope Francis presented his encyclical: Laudato Si, about caring of our common home.  These two anniversary dates that have just passed give us many reasons to reflect, pray, act, and celebrate!

Can you believe it has been a year already!?  It has certainly been a year filled with learning, commitments, collaboration, and inspiration.  As the Congregational Office for Justice, Peace, and Integrity of Creation we have tried to concretely respond to these areas of focus.  With human trafficking we have joined networks of groups working against human trafficking.  From this we have been able to make this crime more visible including providing information to diverse social and faith based groups.  This has helped to create a culture of prevention, especially for those most vulnerable (girls age 12-17) by increasing awareness about the connection to sexism, discrimination and violence against women and girls, so as in the words of Pope Francis to 'prevent this crime against humanity.'

Laudato Si motivated us to come together as a family to share and reflect.  We had many wonderful gatherings talking about our precious mother earth where we shared honestly about our awe before the beauty of God's creation and our responsibility in confronting its destruction, as well as the conversion to an integral ecological spirituality needed in our lives!  It is precisely from listening to these reflections and so much of the personal, communal, familial, and institutional work that is being done for sustainability that calls us to discern and take action together as a Congregation for the care of creation.  In these weeks, as a response to these initial reflections illuminated by Laudato Si, we are hosting a series of Sustainability Workshops where everyone will have the opportunity to choose this corporate action of sustainability in response to the cries of the earth.

In this edition, we also share with you our third Theological and Social Reflection, which is focused on immigration.  This is a situation that demands our attention because migration isn't a crime, the crime is many of the reasons why people are forced to migrate in the first place.  We hope that this reflection helps us to continue responding to the needs of our immigrant brothers and sisters as we take on the risks of solidarity and work for a more just and dignified world for all.

We invite you to take some time to share with others: How are you living our corporate stance against human trafficking?  What has Laudato Si inspired you to do?  How is the reality of migration in the world calling you to respond?

“We need to be reminded that food discarded is, in a certain sense, stolen from the table of poor and the starving.” Pope Francis said. In the first papal visit to the United Nations World Food Programme (WFP), Pope Francis gave his full support to the goal of eradicating hunger and paid tribute to the organization’s staff, including those who had lost their lives at work.

“Do not grow weary or let problems dissuade you,” the Pope told WFP’s governing Executive Board and staff at WFP headquarters in Rome. “In implementing this urgent priority of 'Zero Hunger,' I assure you of our complete support and encouragement.”

He called for member states of the UN to decisively increase their commitment to cooperate with WFP. "Without faces and stories, human lives become statistics and we run the risk of bureaucratizing the suffering of others. Bureaucracies shuffle papers, compassion deals with human beings,” he added.

The Pope's visit shone a powerful and timely spotlight on the urgent need to end hunger, which affects 1 in 9 people on the planet. It came in the first year of work towards the landmark Sustainable Development Goals. At the core of WFP’s work is a drive to achieve Goal 2, Zero Hunger, by the year 2030. 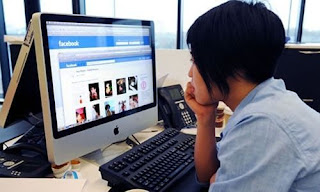 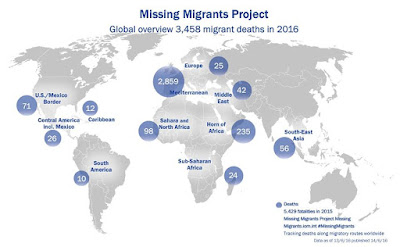 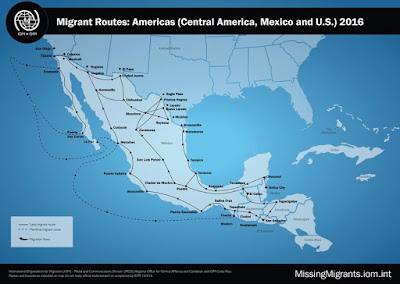