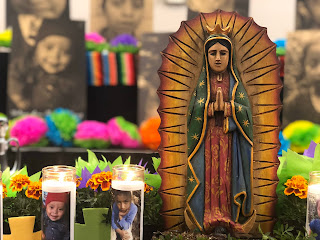 At the Jornada por la Justicia on Saturday, Oct. 12th led by the Latinx Catholic Leadership Coalition and in partnership with the local Hope Border Institute, our DC Catholic Coalition’s campaign for immigrant children joined over 400 Catholics mobilized for a binational nonviolent action in El Paso, TX and Juarez, MX. In the context of routine rejection by U.S. authorities at the bridge, fifteen Mexican asylum seekers, including three families and children as young as one years old, were successfully accompanied across the U.S. border.
As Catholics have been increasingly taking strategic risks, hundreds entered Juarez, Mexico for an emotional, spiritual encounter with migrants living in tents near the bridge and to hear from Catholic legal advisors. The advisors conveyed that such Mexicans have been regularly turned back into Mexico even though they are fleeing that country, and thus, violating their right to asylum. Crossing back into the U.S. the group stopped with a banner of Our Lady Guadalupe near the center where asylum seekers have been routinely denied their rights. Each person took a turn blessing the bridge with holy water. Meanwhile, hundreds more offered a Jericho walk through El Paso, praying at sites of transformation and hope for the Borderland community.
After the blessing, 10 Catholic leaders from the various coalitions accompanied the Mexican asylum seekers to the center of the bridge as they presented themselves for asylum. After a tense 30 minute stand-off with uncertainty, posturing, and solidarity, the asylum seekers were justly allowed to exercise their right to asylum and entered into the U.S.
Pictures and Video of Accompaniment
Call-In Day: Tuesday Oct. 15th
Contact DHS Headquarters
Operator Number: 202-282-8000 or Comment Line: 202-282-8495
Suggested script:
Hello, my name is (insert name) from (Location: City, State, Zip Code). As a person of faith (and a Catholic sister), I am calling DHS Leadership to demand humane changes on immigration policies. We are asking the Administration and the Department of Homeland Security to honor the dignity and rights of all immigrants and to:
Recognize the sacred covenant, internationally recognized, legal right to seek asylum
Stop the Remain in Mexico Program
Stop the use of the "metering list"
Make Due Process the standard NOT the exception
Expand humane services for Asylum Seekers
Provide additional funding for immigration courts and asylum officers
Grant Latinx Catholic Leadership Coalition a face-to-face meeting with DHS Leadership
----------------------
Please amplify the message on social media using the hashtags #JornadaPorLaJusticia and #Catholics4Migrants.
We are here to Stop the Inhumanity!
We are Catholics
We know that an unjust system will fail, if we refuse to cooperate
We will increasingly refuse to cooperate
We are a Eucharistic people- one body, ready to be broken for others.
On behalf of the DC Catholic Coalition
By Eli S. McCarthy, PhD - Director of Justice and Peace | CMSM