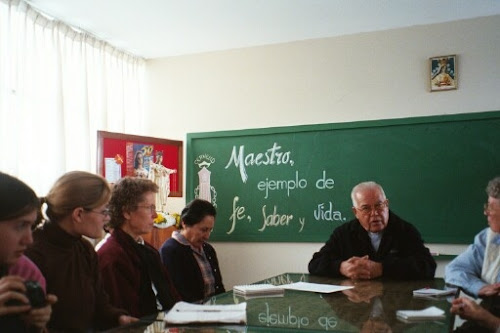 Bishop Luis Bambarén, who was the official observer on the Truth and Reconciliation Commission in Peru, spoke to a UIW Study Tour that included Incarnate Word Sisters in 2002.

The Peruvian and US Anniversaries on August 28, 2020, were invitations to reflection and conversion. Peruvians observed the 17th anniversary of the Report of the Truth and Reconciliation Commission  which had been accepted by the government on August 28, 2003. https://www.cverdad.org.pe/ingles/pagina01.php  The nine-volume report on human rights abuses estimated that over 69,000 people had been killed in the last two decades of 20th century.

In the 1980’s as injustices in Peruvian society were publicly pointed out, groups began to turn to violence.  Then the government responded with more violence rather than efforts to listen and respond to the roots of the problems.  With groups, like Sendero Luminoso and with government forces, violence was used more and more.

While the government may not have killed quite as many people, their approaches fueled ever more violence. Seventeen years ago, the Peruvian government accepted the report of the “Truth and Reconciliation Commission,” not denying guilt.

August 28, 2020, was the 57th anniversary of the “March on Washington” in which Dr. Martin Luther King, Jr. gave a speech “I have a dream.” https://www.youtube.com/watch?v=_IB0i6bJIjw&feature=youtu.be He had said if there was not a movement towards justice, unrest would continue in the U.S.  That has proved true and thousands marched on Washington for the 57th anniversary.  They lamented the murder of another Black person and the patterns of racism.

In San Antonio, Texas, considering the killing of George Floyd, on June 7, 2020, people of many faiths gathered in a Prayer Vigil for #BlackLivesMatter  which  was livestreamed by NOWCastSA.com https://www.youtube.com/watch?v=m_Aj-l9mp9c  from in front of San Fernando Cathedral and many people participated virtually.

To see the text of the litany go to https://saccvi.blogspot.com/2020/06/compassionate-action-builds-our.html

While great challenges continue in Peru in the face of poverty and in the face of corruption, yet people of the US could learn something from Peruvians, as from South Africans and Rwandans.  A society cannot find “easy reconciliation.”  Deep efforts are needed to unveil truths of violence and oppression.

As more truth is discovered, all sides, all groups need ongoing formation in restorative justice.   Retributive justice, looking back and trying to “even out violence” cannot create a positive future.  For people to go into a brighter future, to forge respect and bonds, restorative justice is needed.  Transformative education is needed for the children of victims and the children of the perpetrator to learn to live together and co-create a flourishing society.

Educational movements are growing.  The Charter for Compassion https://charterforcompassion.org/ encourages education https://charterforcompassion.org/partners/education at all levels. Compassionate Integrity Training https://www.compassionateintegrity.org/ is spreading globally and their manual in Spanish, in English, and in German can be downloaded https://www.compassionateintegrity.org/downloads/.  Pace e Bene, https://paceebene.org/ founded by Franciscans offers extensive resources, classes, and invites all to Campaign Nonviolence. https://paceebene.org/action-week These can further transformative education and reconciliation rather than ongoing circles of violence.

Thirty some Incarnate Word Sisters, friends, and co-ministers from Mexico, Peru, and the US participated in the 2020 Campaign Nonviolence educational events remembering the 75 anniversary of the nuclear bombs. They attended the August 6 Vigil, the August 7 Nonviolence Training, and/or the August 8, 2020 large conference. Recordings of all of these events can be seen  https://paceebene.org/cnvconference2020 in English.  Pace e Bene has had classes and resources in Spanish and is working to get more and more available.

In the face of systemic racism, ongoing efforts for “truth and reconciliation” are urgently needed. Each person is encouraged to disarm her or his heart.  All are encouraged to listen to each other.