Laudato Si’: the Pope’s call to action on sustainable development 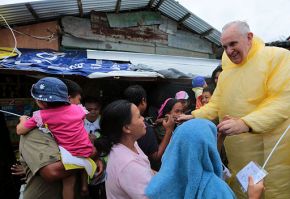 The Encyclical Laudato Si’ (‘Praise be’), released on the 18 June, calls for action on the greatest threats facing the human family today – climate change, growing global inequality and the destruction of biodiversity. Pope Francis sees these as reflections of a world which has put profit and the drive for relentless growth above all other considerations. He urgently appeals for “a new dialogue about how we are shaping the future of our planet. We need a conversation which includes everyone, since the environmental challenge we are undergoing, and its human roots, concern and affect us all.” (para. 14).


It also poses a clear and radical challenge to political leaders to use this inclusive conversation to start building a different model of economic development that benefits everyone, not just the few.
Why is the Pope speaking out now?
2015 is a critical year for development and the future of humanity. In September, the U.N. General Assembly (UNGA) will agree on a new set of Sustainable Development Goals (SDGs) running until 2030. Prior to this is the summit on Financing for Development (FFD) in Addis Ababa in July. Most significantly, in December governments including world’s biggest polluters will meet in Paris to negotiate a new international agreement on climate change under the United Nation Framework Convention on Climate Change (UNFCCC), the culmination of a six year process. Read more
Laudato Si' - http://bit.do/8k3J