“It’s an absurd contradiction to speak of peace, to negotiate peace, and at the same time promote or permit the arms trade.” 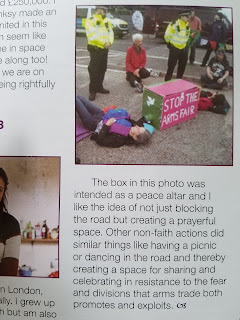 These words from Pope Francis galvanised the commitment of hundreds of people last September at the London ExCel Centre as they participated in creative nonviolent resistance to stop the setting up of the Defence & Security Equipment International (DSEI).

DSEI is the second biggest arms fair in the world held at the ExCel Centre in London every two years. It is heavily subsidised by the UK government to promote arms sales worldwide, and each year hosts representatives from countries with a record of grave human rights abuses. In successive years DSEI has been found to be selling weapons that are banned from sale in the UK, such as electro-shock, torture equipment and cluster bombs. The arms fair also invites some of the most repressive regimes, many of whom are known to use such weapons against their own people.

Under the umbrella of Campaign Against the Arms Trade (CAAT), for seven days prior to the arms fair commencing, activists used every nonviolent and creative means possible to stop it taking place. One such day was led by No Faith In War, a coalition of faith groups. With three times the number of people involved than in previous years, and over 100 arrests, I wondered why Christian activists, especially women, felt called to give their time, energy, creativity, and in some cases their liberty? How did their faith inform their actions?