"You can cut all the flowers, but you cannot stop the spring from coming.” ~ Pablo Neruda 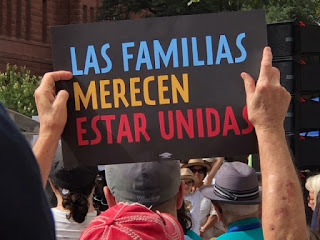 In these challenging political times, let us remember the strength of life and community. In light of immigrants and refugees who seek to enter the United States, Incarnate Word Sisters, Staff, Associates, past and present students of UIW, people working as interns with Incarnate Word Foundation in St. Louis, and people associated with the CCVI Justice, Peace, and Integrity of Creation Committee gather with others holding up international law, the Universal Declaration of Human Rights, and principals of Catholic Social Teaching on the dignity of human beings. UIW students concerned about vulnerable children who are suffering have been gathering resources to help them.

Many of the problems have been created by unjust economic structures. Each of us is called to examine how we are part of unjust structures and how we can have influence in transforming these. While we call attention to current problems of family separation, let us commit ourselves to creating positive solutions to root causes of these problems.

Aly, a Cardinal Community Leader from the University of the Incarnate Word Ettling Center for Civic Leadership, who recently graduated wrote, “The March for Families was moving. Even the heat advisory couldn’t keep St. Louis from going out to show their disapproval about the separation of children from their families.  Filled with many emotions and awed by the stories shared, a DACA student stood in the middle of the crowd of marchers and expressed that every drop of sweat was worth it as it symbolizes the sacrifices and hard-work of families who are seeking better lives for their children.

As a Latina who has always had the loving support of family, I cannot fathom a world where children are being ripped away from the security of their parents/guardian’s arms. It’s easy to feel powerless during a time like this, where nothing seems to make sense, however we must push past the evil and remain hopeful. We are stronger when we all stand in unity and defend the dignity of all humans.”

Jennifer Reyes Lay, the Assistant Director of the CCVI JPIC Office, also attended the "Families Belong Together" rally and march in St. Louis on June 30th.  She shared, "My Catholic faith and incarnational spirituality tells me that Christ is present in every person, especially those who are suffering and marginalized. How we treat those crossing the border is how we treat Christ himself. We are called to welcome the stranger, share what we have generously, and love unconditionally, honoring the dignity of each of God's precious children.

The current policies and actions of our government toward immigrant and refugee families is immoral and inhumane. I believe that I and all people of faith and good will have a responsibility to speak out and take action to stop injustice when we see it. I was proud to march with thousands of others in St. Louis who are standing up for the values of compassion, human dignity, love, and justice."

In San Antonio at the University of the Incarnate Word, Dr. Emily Clark’s summer World Literature class donated 6 boxes of toys, books, and blankets to send comfort and love to refugee children at the border in Texas and beyond. In the College of Humanities, Arts, and Social Sciences, again and again teachers and learners are finding that service to humanity is way to more deeply understand the humanities and vice versa. Dr. Clark wrote, “While reading about immigration and displacement, the crisis unfolded at the border and UIW students wanted to do something to help those little ones in need.”

Sister Jean Durel attended the rally in San Antonio, TX, as over a million people in over 700 places demonstrated on June 30 with the “Families Belong Together” movement. Several speakers at the San Antonio rally stressed the importance of voting, among them U.S. Representative Lloyd Doggett. Doggett said that "it is not enough to just come to a rally, citizens need to get involved, volunteer, and VOTE. It didn’t take 14 days to separate children hundreds of children from their parents and it shouldn’t take that long to reunite them."

Sister Elizabeth Riebschlaeger who also attended the San Antonio rally wrote that as two persons were packing up to leave after the rally, “I just took a quick picture of their shirts without reading them. I was stunned, but delighted when I later saw the picture and read them left to right. Perfect combination!! Deus providebit!” (image to the right)

Sr. Martha Ann Kirk, Chair of the CCVI Justice, Peace, and Integrity of Creation of Committee read the CCVI statement at “Family Separation: A Panel” on July 2 at the Barshop Jewish Community Center in San Antonio. The panel included a pediatrician, an attorney, a pastor, and a social worker.
The CCVI statement says,
“We, the Sisters of Charity of the Incarnate Word, San Antonio, Texas, oppose and condemn the unjust implementation of the ‘zero tolerance’ immigration policies.  Our values and the Gospel of Jesus Christ impel us to reject completely any policy that ignores and defiles the dignity of the human person and uses the most vulnerable among us for political purposes.
We join our voices and our concerns with the United States Conference of Catholic Bishops, the Leadership Conference of Women Religious, the Catholic Health Association, and many other organizations, denominations, and faith and civic leaders in condemning this policy.  We urge members of the United States Congress to act immediately to halt the unjust, immoral and unconscionable implementation of this policy.”
Written by Sr. Martha Ann Kirk, CCVI 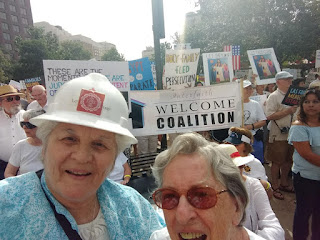