As religious organizations, clergy and people of faith across the country, we believe the 2016 election presents an important opportunity to reflect on our deepest values and commitment to the common good. Elections should be about more than partisan divisions, the latest poll numbers, Super PACs and billionaire donors. Politics as usual is insufficient for the urgent task of addressing the defining moral issues of our time: growing economic inequality; climate change; a broken immigration system that tears apart families; mass incarceration that devastates communities of color; gun violence; and confronting terrorism without abandoning our values. All of these challenges require policy responses, but at root they raise moral questions about the kind of nation we want today and for our children and grandchildren. 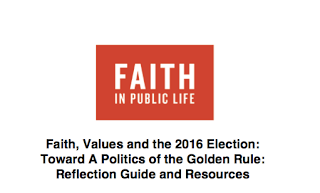 Religious leaders and ordinary people of faith have always been at the forefront of struggles for justice. The soul of American democracy is found in those clergy and faith-based activists who have marched, bled and even died for voting rights, equality and human dignity. Inspired by this prophetic witness and united as people of faith, we turn our attention to this presidential election not as partisans, but as faithful citizens committed to justice and compassion, responsibility and community.

The Golden Rule – as Pope Francis reminded us during a historic address to Congress in September of 2015 – has political implications and requires action. As the Pope said:
This Rule points us in a clear direction. Let us treat others with the same passion and compassion with which we want to be treated. Let us seek for others the same possibilities, which we seek for ourselves. Let us help others to grow, as we would like to be helped ourselves. In a word, if we want security, let us give security; if we want life, let us give life; if we want opportunities, let us provide opportunities.
At a time when some demonize immigrants and Muslims, exploit economic insecurity and sow division to score political points, most Americans are looking for responsible leaders who unite citizens around a better vision.
The 2016 election should be a national examination of conscience.
This reflection guide, endorsed by diverse religious organizations and faith leaders, provides a framework to think about key moral issues heading into the election.