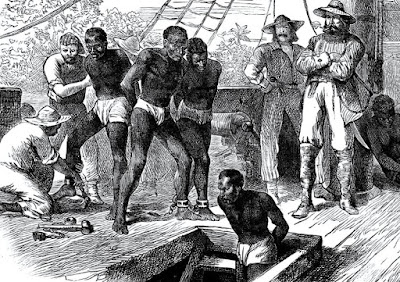 The first documented landing of Africans to the colony of Virginia was recorded by English colonist John Rolfe in late August,1619.  "The White Lion had captured its human cargo from the Spanish slave ship São João Bautista or San Juan Bautista during a battle in the Gulf of Mexico. Before returning to Europe, the White Lion stopped in Virginia for rations.
Those '20 and odd' were not originally intended for the English colonies; they were bound for the Caribbean and South America in the Spanish colonies where slavery was already established. The Spanish had previously brought enslaved Africans to other parts of the Americas and what became the southern and southwestern part of the United States. (See, for example, Coronado National Memorial’s story of Esteban de Dorantes, an enslaved member of the Coronado Expedition.)  . . . . .   Although the Africans arrived in bondage, they brought useful skills that the early English colonists needed to survive. They were skilled farmers, herders, blacksmiths, and artisans. Along with their skills, they brought their own culture, language, and beliefs that shaped innovations in food production and crop cultivation and contributed to American cultural traditions. Despite the skills, innovations, and creativity they brought to this new land, they would undergo generations of hardship and turmoil."
The landing of these Africans was the beginning of 246 years--almost two and a half centuries--of slavery in the United States.” Read more https://www.nps.gov/subjects/africanamericanheritage/400-years.htm
Considering that the first ship of African’s arrived at what is the present site of Fort Monroe National Monument in Hampton, Virginia.  The Episcopal Church in Virginia invites remembrance:  “The 2019 commemoration of the arrival of the first enslaved Africans to North America is for me a highly personal occasion,” said Magness. “As a descendent of slaveholders, and as a white male who came of age in the racially polarized south during the 1950s and 1960s, I am painfully aware of my own complicity in furthering and perpetuating the subjugation of my African American brothers and sisters.  At a time when the racial divide in this country seems to be growing rather than diminishing, we are in dire need of a moment, an event when we can stop and take stock of our responsibilities to bring the races together, perhaps in a new manner that truly is an embrace of what it means to be a follower of Jesus Christ.”
“Let’s unite as one on this day and show our appreciation for 400 years of African American history,” said Terry E. Brown, Fort Monroe National Monument superintendent. “We must embrace the West African concept of Sankofa, which teaches us we must go back to our roots in order to move forward.”
"The first African people were brought to this continent in harrowing and dehumanizing circumstances. As we remember the 400th anniversary of their arrival, I pray that we will do the hard work of reconciliation that God longs for us to do,” said Susan Goff, bishop suffragan of the Episcopal Diocese of Virginia. “God forgive us. God give us courage and resolve. And God bless us."  Read more https://www.episcopalchurch.org/posts/publicaffairs/commemorating-400-years-african-american-history-and-culture-invitation
People have been invited to ring bells on August 25 to remember this anniversary and most importantly to act for a more just society.