The "Season of Creation," a call to action 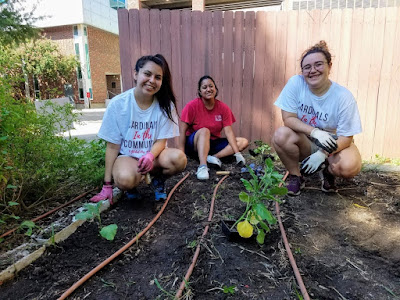 Lauren Gonzalez, Selena Casanova, and Tori Martinez planting in the University of the Incarnate Word Community Garden on Meet the Mission day of service, September 6, 2019.

As the Season of Creation  https://seasonofcreation.org/  is celebrated by Christians around the world from September 1 to October 4 which is the feast of St. Francis of Assisi, the University of the Incarnate Word continues to focus on sustainability, a major issue on the globe. The UIW Sustainability Committee met and continues to work towards more classes and hopefully an academic Minor in this area. Efforts are made to improve energy usage, to recycle more, to compost, and to further community gardening. The Ettling Center for Civic Leadership and Sustainability promotes the community garden, the Sustainability Scholars, and other programs.  The Compassion movement is spreading and one part of this is “The Compassion Tree Project,” to re-green the world. https://charterforcompassion.org/the-compassion-tree-project In the face of climate change, each person is urged to plant one native tree and get two other people to do the same connecting in our common humanity and  restoring oxygen. 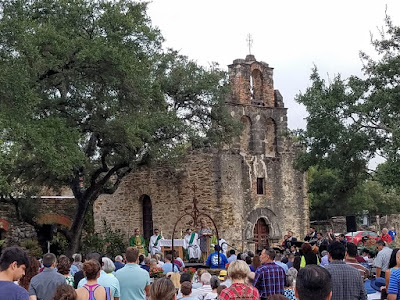 In San Antonio, Texas, Archbishop Gustavo Siller presided at Eucharist in front of Mission Espada, a UNESCO World Heritage site and also a place where Sisters of Charity of the Incarnate Word taught a hundred years ago. This was part of the “Camino de San Antonio Mission: Caring for Creation” which was hosted by the Archdiocese of San Antonio under the leadership of Rebecca Simmons on September 8, 2019. The gathering focused on Pope Francis’ message, Laudato Si, an urgent plea to all people to examine our life styles and change in ways that can protect life on the planet. The Pope calls the earth “our common home” which we must care for together. 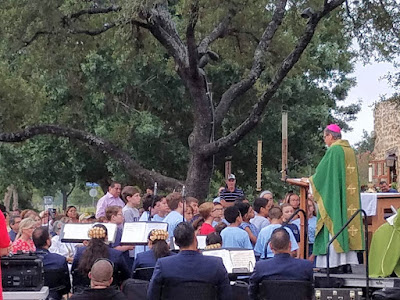 The Archbishop spoke directly to young people and begged them to be leaders in taking care of God’s precious creation. He thanked City Councilwoman Rebecca Viagran for her public service since she is in the area of these historic missions and has constantly been a voice for the people, the environment, and the history in District 3. Mariachi music enlivened the service. 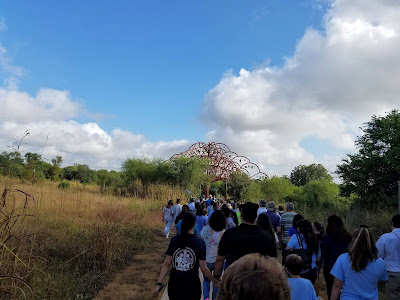 Then people walked towards San Juan,but stopped under the “Tree of Life.” Árbol de la Vida: Memorias y Voces de la Tierra is a community art project created by Margarita Cabrera.  She is a Mexican artist who integrates contemporary art and Mexican folk and indigenous art. The “tree of life” has been an important theme through the ages throughout the world. Mexican folk artists have created “Árbol” art exploring the tree in the Garden of Eden, Jesus’ cross as a tree bringing new life after death, and a rich variety of stories and symbols. Cabrera gathered people to remember, to tell stories, to celebrate their history, and to make clay sculptures which have been hung on the metal tree shaped frame. 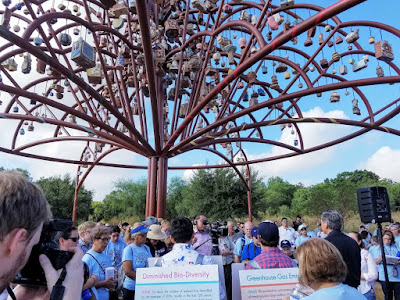 Janie Garza, a Mission Espada parish leader, made a sculpture of a Sister of Charity of the Incarnate Word for the project. She, her family, and friends were taught by the Sisters in the Espada school. She enjoys sharing stories of their ministry there and of the little girl who became Sister Raphael Eccell, CCVI, who eventually served as an Incarnate Word College Librarian for many decades. Garza helped host the Sisters for a special Eucharist at Espada when they held their General Chapter nearby in 2018. In the mission museum area is a photo of the school classroom in 1941 with Mother Alma Nielan, CCVI. 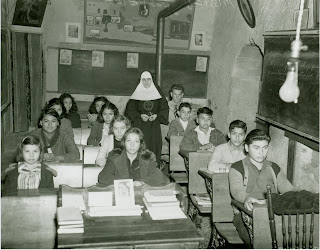 The tree has over 700 sculptures. Garza’s sculpture of the Sister of Charity of the Incarnate Word is in the dress that was used for about a hundred years.  The Árbol de la Vida was commissioned by the San Antonio River Foundation and is the last of four public art pieces that were commissioned to draw attention to four of the missions.

The pilgrims walked towards the river trail to Mission San Juan reflecting on some of Pope Francis ideas in Laudato Si. Instead of seeing creatures as “things that can be used by us,” we must realize that everything is interconnected. St. Francis of Assisi calls sun, moon, water, and earth our brothers and sisters. We are called to recognize our kinship and live in respect and love. Each of us can and should do daily actions to live “more gently on the earth.” 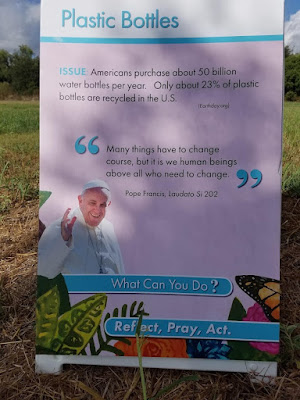 The Pope insists that the world must "hear both the cry of the earth and the cry of the poor." He asks "what the commandment 'Thou shall not kill' means when 'twenty percent of the world's population consumes resources at a rate that robs the poor nations and future generations of what they need to survive.'" 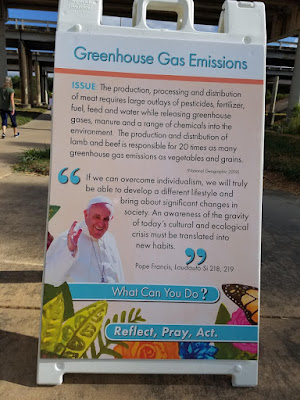 After a mile and half walk, people gathered in front of San Juan Mission and had music. The lyrics noted that following Jesus can involve carrying the cross and making sacrifices. Changes in our live styles of consumption are not easy.

All were invited to make a commitment to actively care for creation and to write that on a leaf. The Archbishop invited people to put their leaves on a tree and then there was a blessing praying that all would live out both daily commitments and long term actions. Daily reflections for the Season of Creation can be read. https://www.ncronline.org/feature-series/season-of-creation-daily/stories 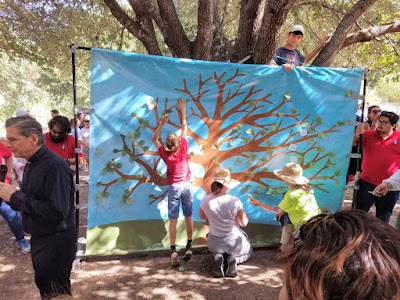 St. Anthony Catholic School http://stanthonysa.org is a partner with the University of the Incarnate Word in the “Brainpower connection.”  Philip Harmon and Chris Waitt of St. Anthony’s assisted carrying information and Archbishop Gustavo read from their posters. After the pilgrimage, Sister Martha Ann Kirk, of the Incarnate Word Sisters Justice, Peace, and Creation committee interviewed these student leaders. See and listen to them by clicking here  https://www.youtube.com/watch?v=XJ13gD_6yNg&feature=youtu.be 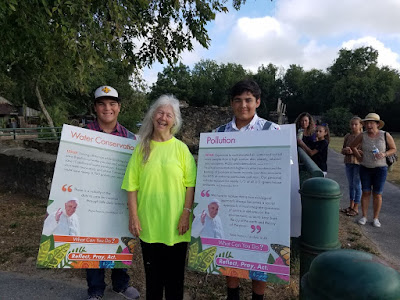 Changes in lifestyle and advocacy are needed.  A student led movement is growing around the world which was started by Greta Thunberg, a fifteen-year-old Swedish student. She left school in August 2018, and sat in front of the Swedish parliament to draw attention to the urgency of responding to climate change. Then in November she had a chance to give a TEDX talk in Stockholm which led to invitations all over the world. See and hear her concern that people are ignoring this catostrophic challenge https://www.ted.com/talks/greta_thunberg_the_disarming_case_to_act_right_now_on_climate

Young people in many parts of the world are showing their concern through Fridays for Future and Global Climate Strike.  Thunberg was nominated for a Nobel Peace Prize nomination for climate activism and she participated in the U.N. Climate Action Summit in New York on September 23, 2019.