Disarming Our Own Hearts, Nuclear Disarmament Needed According to Pope Francis 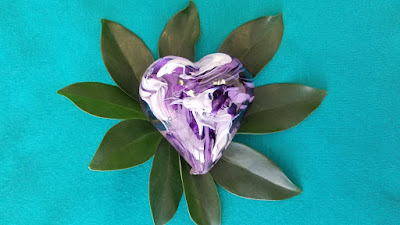 On the flight home from Tokyo, Nov. 26, 2019, Pope Francis restated his conviction that “the use of nuclear arms” and “the possession” of such weapons “is immoral.” He said the Catechism of the Catholic Church will be amended to include this teaching.  He added that he was moved by his visits to Hiroshima and Nagasaki, where atomic weapons were used by the United States at the end of World War II. He described what he learned about the suffering experienced at Hiroshima as “a true human catechesis on cruelty.”
At Hiroshima, he said, “I repeated that the use of nuclear arms is immoral…. Not just the use, but also the possession because an accident of possession or of the folly of some leader...could destroy humanity.
“Let’s think of what Einstein said: ‘The fourth world war will be fought with sticks and stones.’”
“There is no assurance [nuclear energy production] will not cause a disaster,” Pope Francis said, noting the twin disasters of Fukushima and the 1986 disaster at Chernobyl in Ukraine.”

Read more in the America Media article by Gerard O’Connell, November 26, 2019.
August 7-8, 2020, concerned groups led by Pace e Bene, the nonviolence movement founded by the Franciscans, will gather for “Campaign Nonviolence National Conference for the 75thanniversary of the Nuclear Bomb” in Albuquerque, New Mexico. They will learn about the Catholic Initiative growing throughout the world and they will go pray at Los Alamos, New Mexico, where the first nuclear weapons were made.

While the issue of nuclear weapons may not seem relevant in our daily lives, global approaches grow from personal worldviews and spirituality.  On a daily basis, do I seek the destruction of  what is different and who is different from my point of view. Or am I engaged in a process of compassion, of disarming my own heart, and of personal and global transformation grounded in hope?
While inviting people to change hearts and minds is complex, we should investigate research that says, “3% of US military spending could end starvation on earth.” Isaiah’s words are an invitation for now, “Beat your swords into plowshares and spears into pruning hooks.” Our commitment to the poor needs to include the analysis of systems and honest searches for root problems.  As long as a people base their economy on the production of weapons, they may not be willing to look at realities. 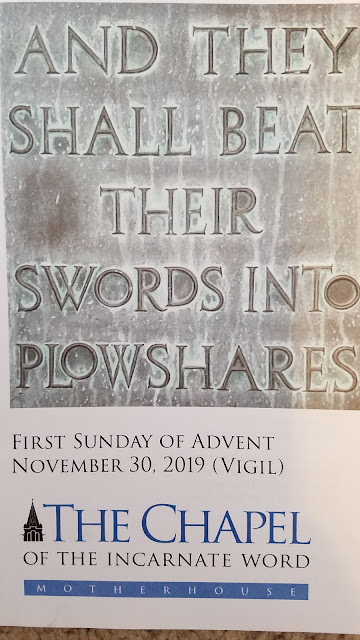 In San Antonio, Texas, Jews, Muslims, and Christians joined in an Interfaith Thanksgiving Service, November 24, 2019, at University United Methodist Church. Both religious leaders and civic leaders including Mayor Ron Nirenberg,  Sheriff Javier Salazar, and Councilmen John Courage and Manny Paleaz  spoke.  University of the Incarnate Word Music faculty Orit Eylon led the children’s choir from Agudas Achim Synagogue.  Sister Martha Ann Kirk, CCVI, was invited to share a Prayer for Unity. She said,  "I was invited as a Catholic representative to speak in this service. Our Catholic leader Pope Francis is in Japan now and prayed in Nagasaki this morning.  I have also seen the ruins and prayed there.

He said, “in a world where millions of children and families live in inhumane conditions, the money that is squandered and the fortunes made through the manufacture, upgrading, maintenance and sale of ever more destructive weapons, are an affront crying out to heaven.”

While in 1945, people were seeking to stop the burning of children at Auschwitz, burning thousand of children in Hiroshima and Nagasaki was a questionable way to do that.  We seek a world safe for our children, the only way to find that is to unite and make a world safe for all children, immigrant children---all children.   Yes, unite for the dignity of all, the life of all.

So we unite tonight, what a beautiful sign of hope.

We listen to each other, what a beautiful window to light.

We speak to the Holy Compassionate One, what an opportunity for our hearts of stone to be transformed into hearts of compassion.

Let us pray.  Let us pray with eyes open and turn around looking at each other, seeing, as many people as we can. . . smiles are permitted.  YES, turn around!

Source of all life, may we cherish each person as precious.

Source of true security, may we disarm our hearts.

Source of all love, may we let your unselfish, embracing love flow through us . . .

Our presence here is a plea that we may be one.

We trust in your goodness,  Amen. 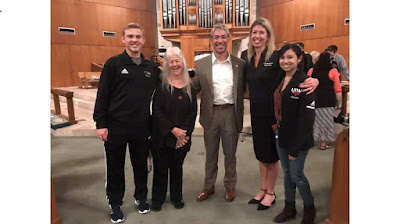