Carol Adams, a nationally-renowned eco-feminist and lecturer, presented on her foundational critical work, The Sexual Politics of Meat: A Feminist-Vegetarian Critical Theory, at the University of the Incarnate Word sponsored by the growing Women’s and Gender Studies Department and the College of Humanities, Arts, and Social Sciences, October 11, 2017. 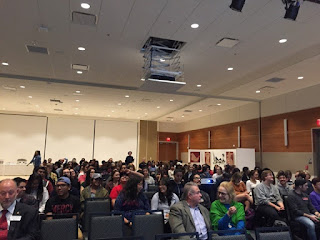 In addition to Adams’ lecture, local San Antonio artist Suzy Gonzalez, who was inspired by The Sexual Politics of Meat, shared her artwork.  One of the most impactful pieces was Gonzalez’ rendition of the Skinny Cow ice cream advertising mascot.  Gonzalez highlights the sexuality of the cow in the ad, accentuating how women and animals are interlinked in advertising, and she substitutes the cow’s head with a bloody butcher knife. (See picture above.)  In doing so, she reminds viewers that cows are not willing participants in their own destructions: advertisers only like to pretend they are to assuage its consumers’ consciences. 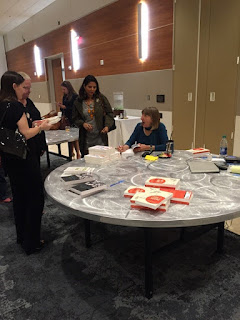 With over 150 attendees, the lecture attracted Incarnate Word students, faculty, and staff as well as members of the San Antonio community.  During her lecture, Adams detailed the idea of “the absent sexual referent” that happens when consuming meat and participating in meat-eating culture.  She argued that the meat industry romanticizes and even masculinizes meat-eating, so much so that the death of animals is obscured and rarely considered—even as the animals are being consumed. Strikingly, Adams also pointed out that depictions of animals are often intertwined with depictions of women in Western popular culture.
Adams used modern advertising ads from a myriad of venues to show this often twinned existence between masculinity and meat-eating.  By extension, Adams suggested that sexual violence is a byproduct of a culture that celebrates meat consumption.  Through the absence of a sexual referent, meat-eaters can be seen as complicit in a culture that values selfishness and immediate gratification over not only the death of animals but also the women it uses as illustrative of meat consumption.
For an example of the way that “butchering and sexual violence” appear in a particular ad, readers of this blog might refer to Adams’ own analysis of an Australian Premier Wine Estates ad from 2015:  http://caroljadams.com/carol-adams-blog/the-sexual-politics-of-meat-in-a-wine-ad

Following the lecture, UIW Women’s and Gender Studies hosted a vegan reception along with a book signing with Carol Adams. 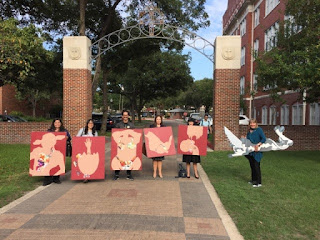 One of the people attending Sister Martha Ann Kirk began being a vegetarian in 1976 when she learned that eating lower on the food chain might contribute to having more food for the peoples of the world. Then she began to think that while we do not have control over much of the violence in the world, we can decide that animals do not have to be killed for us. Kirk invites others to think of how eatingless meat can help the environment.  For Kirk, Carol Adam’s ideas helped illumine and integrate many ideas of choices for life, respect, and compassion.

For further information about Adams’ writing and ideas, please visit www.caroljadams.com.
Suzy Gonzalez’ website devoted to her art can be found at www.suzygonzales.com.

By Dr. LuElla D’Amico, Assistant Professor of English and Co-Coordinator of the Women’s and Gender Studies program at the University of the Incarnate Word.

More information on meat and the environment:

If Everyone Ate Beans Instead of Beef (The Atlantic)
https://www.theatlantic.com/health/archive/2017/08/if-everyone-ate-beans-instead-of-beef/535536/