For the Displaced, the Olympics of Rio have nothing to do with our story 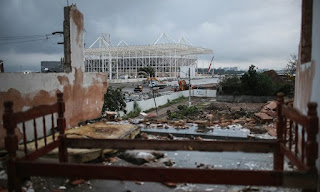 RIO DE JANEIRO — Just over there, the dolphin-backed Michael Phelps glides through another heat. Over here, a lone ramshackle favela house practically leans against the Olympic Park where Phelps swims. Just over there, Simone Biles does a breathtaking handspring. Over here, the sodium stadium lights glint on the scarred hardpan that was once a vibrant community before it was bulldozed to make room for the Rio Games.
Just over there, the International Broadcast Center rises like a monolith, while over here it casts a shadow over the listing sheet metal roof of Delmo de Oliveira’s favela house, which sits directly across the parking lot. Just over there, Katie Ledecky lashes through the water, but over here there is no crowd noise, just a young man playing guitar for a handful of residents who refused to be evicted even as the Games begin. Just over there, International Olympic Committee members enjoy prime seating and dine on a per diem of $450 a day, while over here, the Brazilian minimum wage amounts to $228 a month, and nobody has a ticket to the Olympics, even though it’s just 50 yards away,
“If they didn’t want us to stay here, I don’t imagine they’ll invite us inside,” says Maria Da Penha Macena, 51.
The extent to which the Olympic “movement” has become a destructive force, driven by an officialdom whose signature is indifference, can be seen just outside the Olympic Park fences, and I mean just outside. The Vila Autodromo favela was once a working-class neighborhood of 3,000 residents curling around a lagoon and the perimeter of the park. Now all that’s left is Olympic parking lot tarmac, raw dirt and 20 tiny white utilitarian cottages, built grudgingly by the city as a concession to a core of families who refused to leave even as their homes were demolished. For a while, some of them lived in converted shipping containers. One of the new cottages bears a sign: “Museum of the Evicted,” it reads.
Most of the other 800 families who used to live here were persuaded to move to public housing or bought out or both. But not Da Penha, who once had a three-story home with a fruit tree garden. Or Delmo de Oliveira, 51, who won a hard-fought legal injunction prohibiting his favela house from being pulled down, though he doesn’t live in it anymore. He has left it standing mainly as a “symbol,” he says.
“The Olympics has nothing to do with our story,” he said through Washington Post reporter Dom Phillips, who acted as interpreter in conversations with residents about their battle to save their homes.
The thing to understand about a favela is that, more often than not, someone’s grandfather laid the ground floor 40 or so years ago. Generation builds on generation: De Oliveira built his home on top of his mother’s. People work and save for years for the money to buy the ochre bricks, small sacks of cement, corrugated sheet metal that they use to build hand over hand. What looks like a shanty represents decades of precious labor.
About a quarter of Rio de Janeiro’s population lives in favelas, which despite their lean-to appearance have tile floors, plumbing and electricity, sometimes siphoned from the city with a tangle of cables. In de Oliveira’s case, cables and pipes run like vines up the side of his house, alongside a corrugated iron staircase that rises up the exterior.
The residents of Vila Autodromo were among an estimated 60,000 people who lost homes to the Rio Games, which is part of a larger effort to turn the Barra da Tijuca area into condo-rich suburbia. The local developer, Carlos Carvalho, has declared bluntly there is no place for the poor here. “Some things won’t do,” he told BBC Brasil. The bulldozers and claws came in and started ripping away the masonry and prying up the metal. Residents say they were pressured, intimated, even threatened.
“We were being swallowed up,” De Oliveira said.
Continue reading HERE
Publicado por Jennifer Reyes Lay en 12:38 PM