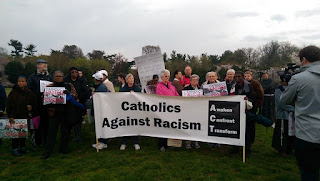 A reflection by Jennifer Reyes Lay

April 3-5, 2018 thousands gathered in Washington D.C. to commemorate the 50th anniversary of the martyrdom of Rev. Dr. Martin Luther King Jr. by continuing his work to end racism with the launch of "A.C.T. Now: Rally 2 End Racism."  This initiative was sponsored by the National Council of Churches in the U.S. and endorsed by a variety of faith-based organizations including LCWR, NETWORK, the Franciscan Action Network, and Pax Christi USA.  A.C.T. stands for Awaken, Confront, and Transform, reflecting the call to awaken people of faith to the reality of racism and our historical ties to it, confronting the racism that is still prevalent in the Church and in the world, and working to transform these systems of racial oppression.

The event began on Tuesday evening, April 3rd with an ecumenical prayer service at St. Sophia Greek Orthodox Cathedral.  Representatives from both the World Council of Churches and National Council of Churches offered their reflections on the event and the importance of people of faith coming together and committing to finish the work to end racism.

On Wednesday, April 4th, the 50th anniversary of the assassination of Rev. Dr. Martin Luther King Jr., tens of thousands of people gathered at the MLK Memorial on the National Mall for prayer and silence in memory of Dr. King and all who have gone before us in the fight to end racism.  From the MLK Memorial, marchers processed in silence to the middle of the national mall where the Rally 2 End Racism was held throughout the day, featuring a powerful and diverse list of presenters speaking to the topics of awakening, confronting, and transforming.  The Rally kicked off with an interfaith prayer service including Christians, Muslims, Jews, Hindus, Buddhists, and many others.  Present at the march was a small but mighty group of Catholics against racism made up of both lay and religious.

To view many of the moving speeches from the Rally check out the website from the event here: http://www.rally2endracism.org/the-launch/.

After being energized and inspired by the Rally on Wednesday, Thursday was a day of action and advocacy on Capitol Hill.  We participated in legislative visits to our Senators and Representatives, sharing with them the legislative priorities related to racism identified by this campaign such as environmental racism, gun violence, mass incarceration, education inequalities, immigration policies, and exploitative economic practices such as pay day loans.  Those who weren't able to attend the Rally were also encouraged to engage in local advocacy visits and voter registration campaigns in the cities in which they live. 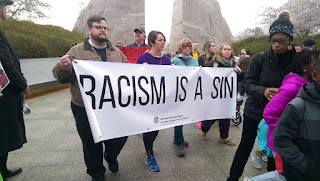 It was powerful to see so many different Christian denominations coming together and making a public commitment to work to end racism.  This event was just the kick off for a multi-year campaign to encourage faith communities to awaken themselves to the reality of racism, confront this legacy tied to our faith tradition, and transform ourselves and our communities to end racism once and for all.  As people of faith we have a responsibility to work to realize the kingdom of God here on earth, building beloved community where all are free and able to live the lives that God has intended for them.  Ending racism is a vital part of this kingdom building work, and with the commitment displayed at the Rally 2 End Racism, I am hopeful that we can make serious progress on eliminating this sin that has plagued our communities for so long.

To learn more about the campaign and how you can get involved, visit: http://www.rally2endracism.org.
Publicado por Jennifer Reyes Lay en 12:34 PM