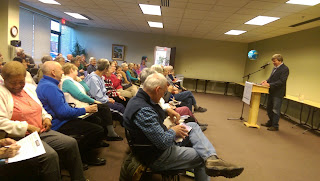 On Monday, April 16th approximately 85 people gathered in St. Louis, MO to listen to John Dear share about his newest book: They Will Inherit the Earth: Peace and Nonviolence in a Time of Climate Change.  His talk was held at the center of the Franciscan Sisters of Our Lady of Perpetual Help, sponsored by the Intercommunity Ecological Council which includes the Sisters of Charity of the Incarnate Word.  The CCVI Congregational JPIC Office was proud to help support this event as it brings together two of our main focuses for the Congregation: nonviolence and care of creation.

John Dear gave a powerful and moving talk, mixing together biblical exegesis, scientific facts, humor, faith, and hope.  The title of the book comes from a reflection on the 3rd Beatitude "Blessed are the meek, for they will inherit the earth" (Mt 5:5).  Dear, drawing on reflections by Thomas Merton, translates the ancient understanding of "meek" to be our modern day equivalent of "nonviolent" in the sense of King/Ghandian nonviolence.  It is those who live a life of committed nonviolence who will be at one with the earth.  He also reflected on the term "blessed" and translated the original word to more accurately mean, "awake or get up, and go forth."  So these are calls to action.  Awake and go forth, living nonviolence with all of creation, and you shall live in harmony with the earth. 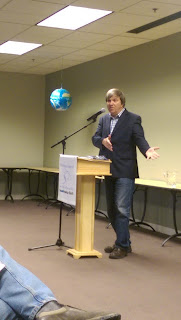 John Dear has proven himself over and over again throughout the decades to be a dedicated champion of peace and nonviolence.  He challenged those in attendance to get involved in more grassroots organizing because it will take a large scale nonviolent grassroots movement to truly change the course we are on right now which is destroying the planet.  We need concerted effort to end all wars, and the United States is the largest supplier of the arms trade around the world.  We have been engaged in perpetual war for decades, feeding what President Dwight D. Eisenhower called the "Military Industrial Complex."  For the survival of the plant and all of creation, we must shift from a war and violence based economy, to a peace and flourishing of creation based economy.

Dear praised the encyclical "Laudato Si" by Pope Francis which has inspired a renewed focus and commitment to an integral ecology that honors our interconnectedness with all of creation.  He also talked about the work being done in Rome to bring together major leaders of nonviolent movements from around the world to share stories, ideas, practices, and foster a stronger commitment to peace and nonviolence throughout the Catholic Church.  In 2016 after the first such meeting they issued a Appeal to the Catholic Church to Recommit to the centrality of Gospel Nonviolence which we as a Congregation signed onto in 2017, along with hundreds of other religious congregations and Catholic organizations.  The call now is for the Pope to issue an encyclical specifically on Just Peace and Nonviolence.  Dear encouraged attendees to advocate for this encyclical as well.

Overall it was an inspiring and challenging evening with John Dear, learning about the connection between nonviolence and care of creation, and holding on to the hope that together we really can make a difference in the world.  If you would like to learn more about the work that John Dear is doing check out Pace e Bene, and you can sign up to receive e-mail updates on the ongoing work for a more peaceful and nonviolent world.
Publicado por Jennifer Reyes Lay en 11:06 AM