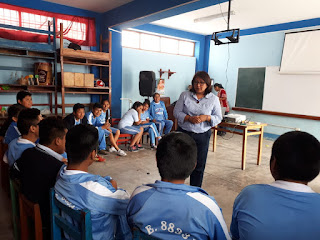 Sister María Márquez Fuentes was born in Mexico City and she was consecrated to the God of life as a Sister of Charity of the Incarnate Word on August 15, 2006. Sr Mary, as she is known, has lived in Peruvian lands for about three years.

Her passion for extending the healing ministry of Jesus Christ is tangible in the creative and dynamic leadership of the Incarnate Word Health System in Chimbote (Peru); where she is currently the General Director. Her strong commitment in the Mission has led her to adopt a proactive approach to combating human trafficking, including progressive efforts to inform about risk factors and how more people can be part of putting an end to 21st century slavery. 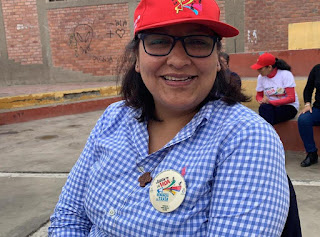 "Since I arrived in Chimbote, I have seen many people in need of professional health care. People need quality and warmth to find relief from the disease. And I am convinced that the health sector has a role to play in the prevention of human trafficking; for our congregational charism demands that we must promote DIGNITY in the history of every person. My mother taught me that faith always frees and dignifies, I prepared myself to serve them well and here I am", our beloved sister Mary said.

In this arduous and complex task of making the crime of human trafficking visible, which consists of capturing, transferring and exploiting the person, violating their right to freedom and dignity; Sister Mary is supported by our Religious Congregation that published its Corporate Stance against this crime in 2015 and by the 'Kawsay Network Peru', Religious Life in Peru committed to the construction of a society without human trafficking. 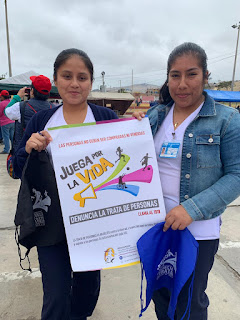 'Since the Congregation published the Anti-Trafficking Stance, I felt a great call to do something else. So, when I arrived in Chimbote, they invited me to be part of the Kawsay Network. I feel very grateful for the impulse of the JPIC Office of the Congregation because I have multiple opportunities for formation in the Network, and reality is constantly challenging us to form ourselves in the mystique of attention, of listening, of dialogue and of collaboration', Sister Mary explains.

Currently, Sister Mary has been collaborating with the "Play for Life" campaign in Chimbote, launched by the Kawsay Network Peru. This campaign seeks to "make visible and encourage the denunciation of Human Trafficking" especially during the 2019 Pan American and Parapan American Games.

This campaign seeks to make human trafficking visible during mass sporting events. Now that more than 150 thousand visitors and 8 thousand athletes from 41 countries will arrive in Peru, the president of the Council of Ministers of Peru, Salvador del Solar, informed during his presentation before the Plenary Session of the Congress of the Republic. 'In mass sporting events, there is a possibility that cases of human trafficking could increase. This crime, which attempts against the dignity of every person, mainly affects girls and boys, and women who are in a situation of greater vulnerability", as we can read from the Press Release of the launch of the Campaign. 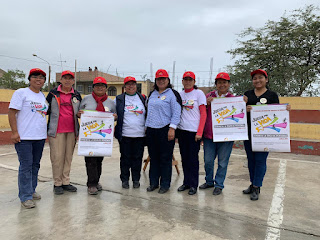 It is worth mentioning that our Religious Congregation has been part of the Kawsay Network since 2013. Kawsay Peru articulates resources and initiatives of more than 30 Religious Congregations towards the prevention, reception of victims and incidence against human trafficking through their respective apostolic works. And it is part of other international networks of Religious Life and Civil Society.

Sister Mary and her work impels us to act at all levels and in collaboration, to try to transmit that faith that they transmitted to us and also, to fight against the system that explodes and breaks us all little by little.
Thank you because you show us that faith is the rock where we need to lean on and from which life is faced. Thank you for being that real and tangible presence of the love of God in Chimbote.