11 Facts About Factory Farms and The Environment

Did you know that Factory Farms are having a huge, detrimental impact to the environment and contributing to global climate change?  Check out these 11 facts to learn more about the connection between factory farms and our environment: 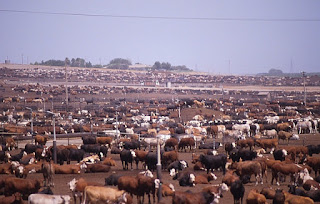 1)  About 10 billion land animals in the United States are raised for dairy, meat, and eggs each year.

2)  Factory farming accounts for 37% of methane (CH4) emissions, which has more than 20 times the global warming potential of CO2.

3) Manure can also contain traces of salt and heavy metals, which can end up in bodies of water and accumulate in the sediment, concentrating as they move up the food chain.

4)  When manure is repeatedly over applied to farm land it causes dangerous levels of phosphorus and nitrogen in the water supply. In such excessive amounts, nitrogen robs water of oxygen and destroys aquatic life.

6)  Globally, deforestation for animal grazing and feed crops is estimated to emit 2.4 billion tons of CO2 every year.

7)  Corn, wheat, and rice, the fast-growing crops on which humanity depends for survival, are among the most nitrogen hungry of all plants.

8)  Large-scale animal factories often give animals antibiotics to promote growth, or to compensate for illness resulting from crowded conditions. These antibiotics enter the environment and the food chain.

9)  Factory farms contribute to air pollution by releasing compounds such as hydrogen sulfide, ammonia, and methane.

10)  The US Department of Agriculture estimates that confined farm animals generate more than 450 million tonnes of manure annually, 3 times more raw waste than generated by Americans.

11)  The waste lagoons on Concentrated Animal Feeding Operations (CAFOs) not only pollute our groundwater, but deplete it as well. Many of the farms use the groundwater for cleaning, cooling, and drinking.