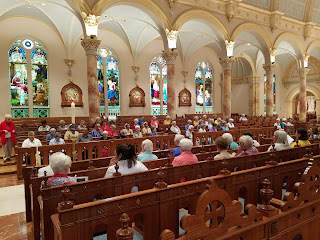 In front of the altar were 10 unlit candles in remembrance of the 10 lives that had recently been lost to human trafficking in San Antonio.  Sr. Mary Henry CCVI led the group in silent reflection for each person who died and then lit their candle.  The rest of the prayer was joining in some contemporary psalms together.

Outside the Chapel posters created by students from the University of the Incarnate Word were displayed of various people who have in the past or are currently working to end the sin of human slavery and human trafficking.  Those featured included Sr. Chan Kong a Vietnamese Buddhist nun, Amma a Hindu woman known for her hugging, and Frederick Douglas a former slave and abolitionist.