By Hannah Graf Evans, August 2, 2017 from the Friends Committee on National Legislation


The Deferred Action for Childhood Arrivals (DACA) program is under threat. We need you to take action over the next month to protect young immigrants from being deported away from the only country they call home. 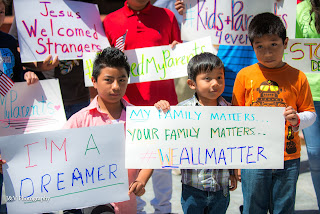 Right now, the administration is considering whether to put nearly 800,000 young people who grew up in the United States at immediate risk of deportation. Despite President Trump’s prior statements that he supports the recipients of the Deferred Action for Childhood Arrivals (DACA) program - often referred to as Dreamers - their futures hang in the balance. Ten states threatened to sue the president if he does not rescind the program by September 5. Over the next month, we need Congress to raise the alarm and support Dreamers.

FCNL has been working towards a permanent, congressional solution for Dreamers for over 15 years. Since President Obama started the program in 2012,DACA offered young people who grew up undocumented in the United States a way to apply for protection from deportation and legal work authorization. Keeping DACA in place is essential while Congress passes a permanent solution, such as the bipartisan Dream Act of 2017 (S. 1615) which would provide a pathway to citizenship for qualified applicants.

How can Congress weigh in?

President Trump has indicated that he alone will make this decision. He needs to hear from lawmakers that DACA is more than a program; it’s about the people who have had their lives transformed over the last five years. Legislators must prioritize this issue, and make it clear to the President how devastating, immoral, and unpopular rescinding the DACA program would be. Senators can:
You can take action today.
·     Write directly to your Senators.
·     Publish a letter to the editor.
·     Use state-specific fact sheets on DACA to help educate your Senator and community about the role that DACA-recipients play in your state.

Texas led the lawsuit along with Arkansas, Alabama, Idaho, Kansas, Louisiana, Nebraska, South Carolina, Tennessee, and West Virginia. If you are from one of these states it’s especially important that your Senator hears from you and leaders in the community (business, faith, educators) who support protecting Dreamers. The National Immigrant Law Center wrote about possible scenarios forDACA given the current legal threats.

We must ensure we are standing in solidarity with Dreamers and doing everything we can to keep DACA in place.
Publicado por Jennifer Reyes Lay en 10:38 AM