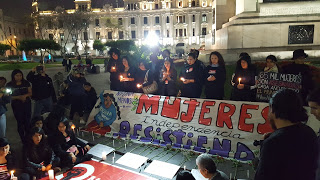 Hundreds of women every year are murdered for one reason: their gender. The United Nations Organization (UN) warned in April 2016 that 14 of the 25 countries with the highest rates of femicide are in Latin America.  Therefore, on Wednesday October 19th women went on strike, prayed and dressed in mourning in the Plaza San Martin in Lima.

And we were not alone.  After the rape and murder of a teenage girl in Argentina, various movements from several Latin American countries like Mexico, Peru, Guatemala, Paraguay, Bolivia and Uruguay joined the march Not One Less (ni una menos).

In Lima, we met with other women from various organizations and creeds in a vigil where we remembered and named the victims of femicide and attempted femicide recorded  since August 13th of this year, the day Peruvian people took to the streets demanding justice. 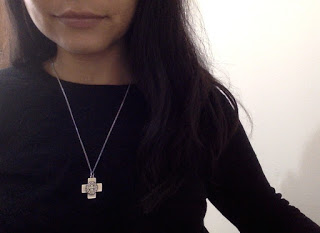 During the vigil, some women explained the reason for taking a moment of silence for them, but also the reason for not remaining silent and making heard those voices that are being violated. Before the vigil ended, one of the women said: 'Our struggle continues. We need to continue building a better society. No, it is not reasonable that even when we are killed they continue blaming us for being women. So what if we wear skirts? Why isn’t anyone blaming the men who commit these crimes?

Why we perpetuating these ideas?

As the Congregational Office of Justice, Peace and the Integrity of Creation we stand with all the women around the world who are rising up against violence and call for an end to violence against women. 'If they won’t stop killing us, we will not stop fighting.’