The Pope met with RENATE, a European network of religious in fight against trafficking 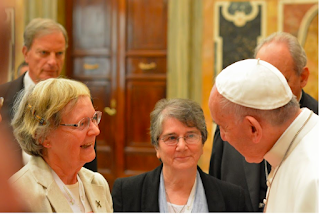 The Pope met with RENATE, a European network of religious who are committed to work together in the fight against human trafficking and exploitation. Members consist of women religious, priests and laypersons who all have professional training in fields such as psychology, counseling, law and law enforcement.

While much has been done in recognising the seriousness and extent of this “true crime against humanity,” he said, “much more needs to be done on the level of raising public awareness and effecting a better coordination of efforts by governments, the judiciary system, law enforcement officials and social workers.”
The Pope thanked those present, especially women religious, for their “faithful witness to the Gospel of mercy, as demonstrated in your commitment to the recovery and rehabilitation of victims,” and for efforts in advocacy, education and building coordinated responses to the problem.
“I think especially of the distinctive contribution made by women in accompanying other women and children on a deeply personal journey of healing and reintegration,” he added.
However, the Pope recognised that one of the challenges they face “is a certain indifference and even complicity, a tendency on the part of many to look the other way where powerful economic interests and networks of crime are at play.”
“For this reason, I express my appreciation of your efforts to raise public awareness of the extent of this scourge, which especially affects women and children,” he said.
He said he hoped their meeting would help them become “a more effective witness to the Gospel in one of the great peripheries” of the world today.