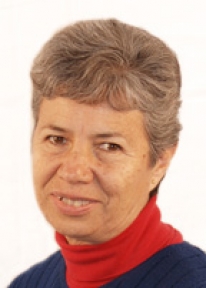 In 1966, on August 15, our beloved Aurora Ramirez Arroyo took her final vows.  She is now celebrating her jubilee of 50 years of service to God in community.  In the biological family of Aurora Isabel every person has a nickname that shows a special affection, and it is the same in our Congregational family.  So perhaps you are wondering who we are talking about because you know her by a different name; the sister story we are sharing this month is about Ivon (or Bonbon) as she is lovingly known by her fellow sisters.

Ivon is a Mexican national who has always opted for life.  Her disposition to serve the poorest of the poor has led her to many different cities.  She remembers especially fondly the lessons she learned in the Sierra Taraumara.  The challenges she experienced there led her to understand the importance of working with other organizations, which she applied in her time in Ciudad Juarez (Mexico).

With these rich experiences, she arrived to the challenging capital of Peru: Lima.  She quickly integrated into the Network of Religious Life working on Human Trafficking called “Kawsay.”  Since then, her ministry in Initial Formation is strongly connected to her commitment to build a better world for all.  Kawsay has the goal of creating actions to educate about human trafficking in different areas of society.  For the last three years, Ivon has collaborated on the work of prevention, as well as assisted in the exchange of information and resources that help those who have been victims of human trafficking.  We thank her for her witness and commitment to end Human Trafficking from Lima Norte, Comas, a geographical are that represents one of the most at-risk and vulnerable populations in Lima.
Publicado por Oficina JPIC CCVI en 8:50 AM