Their Gaze Remained in the Eyes of the People 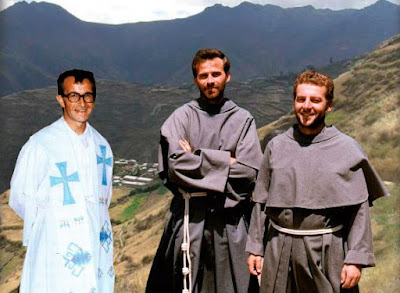 On the occasion of the beatification of the martyrs Miguel, Zbigniew and Sandro, in the near future, 22 persons, including consecrated men and women and members of the laity, responded to the invitation of the Conventual Franciscans to live a mission experience in Pariacoto, Huaraz, from August 5 to August 15.

From August 5 to August 7, we prepared for the experience in a retreat-workshop in Chimbote, which helped us to prepare our hearts and to be ready for the mission.

The topics responded to the needs in the areas of information, sensitivity and formation.

a) Information: This placed us in the context of the mission lived by the martyrs, through the verbal testimony of Father Jareck, the booklet they gave us, the video they presented and also through the conclusions reached during the retreat they had previously in Chosica.

b) Sensitivity: before starting the mission, it was important for us to remember that having Hope is having the conviction that the things we do have a reason. This is more important than evaluating results. In this regard, we had the support of the reflection guided by Father Vicente regarding the Decalogue of Missionary Dialogue by Saint Francis; all of this was very helpful to us at the spiritual level.

c) Formation: The Workshop “Emotional Company for Persons affected by Violence”, presented by Lenin, a psychologist, helped us to learn many things. Especially, it helped us to know the characteristics of each stage in the process of closing wounds caused by violence, being aware of the way we are affected by this situation and how wounds are opened, if we are going to be able to contain this and to close it. Another valuable support was the Accompaniment Guide, the patterns to be followed before, during and after the conversations with the families, including a practice with the participants in the mission.

Later, we participated in the activities for the anniversary of the martyrdom (August 9), which ended with the blessing and “sending forth” of the missioners, who spent five days visiting, accompanying and sharing the life of the people who live in Pampas Grande, Cochabamba, Pariacoto and Yautan.

My Missionary Experience
At an individual level

My missionary experience increased in intensity as time went by, both physically and emotionally.

On Monday, we were in Callima; it was a day of openness and a welcoming attitude. I became familiar with the mission place and felt surprised with what the Lord was showing us along the way. The visit to the homes was very rapid; many people did not know about the martyrs because they were young families or because they came from other places.

On Tuesday, we were in Chauca; it was a day of waiting, but also a day of hope, because there were few families in this place, and we thought that we were not going to meet in the afternoon, but we met with several mothers and with many children with whom we could share.

On Wednesday morning, I was with two missioners (a lady called Karen and Sister Milagros, member of the Handmaids of the Sacred Heart) in two radio transmissions. It was an opportunity to communicate with each other indirectly, but we reached many families. In the afternoon, we went to Paqueyoc. I was more in silence. I devoted my time to contemplating the faces, the expressions. I listened to some testimonies related more closely to the day of the martyrdom, but contemplated from a third perspective.

On Thursday, we stayed in Pariacoto to organize the encounter with the children which would be in the afternoon, and the encounter with adults (the mothers club, the adorers, the brotherhood, etc.), in the evening. The only thing we did that day were visits to the homes to invite the people. We stopped to listen to some of their sorrows and consoled them as much as we could. In the afternoon, the children were very happy. The group I accompanied was a little difficult (children 3 to 5 years old), because I am not used to working with such small children and I am not familiar with the activities or songs that can be taught at that age. In the evening I shared the sorrow for the dead of the martyrs, felt by the people who were invited to this event. I saw the video about the martyrs again, but this time it affected me deeply because I had been in contact with the living history of Pariacoto.

On Friday, we visited “El Milagro”. This was a day of great tiredness and conflicts for me, because I heard the experiences of great sorrow, of feeling helpless, of resentment, that were shared with us.

At a group level

I liked the diversity of our group, because we shared the mission with religious men and women, with the laity, with young people and adults, who lived in the places we visited or who were there for the first time. This diversity enriched the experience. After each visit, almost at the end of the day, we stopped to contemplate it, in order to see what would be the best thing to do the next day. We made projects based on the knowledge we already had of the place and listening with care to the Holy Spirit who guided us. We were also able to listen to each other, to accompany each other and to restrain ourselves.

I think that everything we lived during these days has been helpful to live the beatification, because nobody loves what they don’t know, and nobody is grateful if they don’t know what others are giving them as a gift. The Beatification of the Martyrs is a gift from the Church; it is a gift from God. Those who knew Miguel and Zbiniew say that they were Saints. They knew it from the moment they arrived at Pariacoto (simple hearts know how to appreciate the passing of God among their people). Their attitudes, their feelings and their dreams to achieve the best for themselves, their daily living and the closeness with everyone, was a strong enough motive to give their lives. Without this experience, I would not have known the martyrs. And it was not just a mere knowledge, because I think that being in the same places they were and following their footsteps, sharing life with the inhabitants of the area, having a slight understanding of the love they felt for this portion of the people of God, will help me to live the beatification with joy, to go from death to resurrection, because the martyrs are Witnesses of Hope.

I will never forget the joy of having prepared myself for this mission, having prepared my heart for the encounter with the families, knowing something more about myself and knowing the mission of the martyrs. It also strengthened in me the wish to spend my life building the Kingdom of God here and now.
Publicado por Jennifer Reyes Lay en 11:50 AM