COP21 has ended and the Final Agreement has been signed by 195 countries.  Read below the summary of the takeaway from the Global Catholic Climate Movement:

AMBITION MECHANISM
The agreement has established check ins every five years at which countries will scale up national commitments until we reach our vision - a phase out of fossil fuel emissions by mid century, which keeps warming below 1.5C. The first discussion of the collective effort will take place in 2018, before the agreement comes into effect. This needs to be used to scale up current targets, as there’s still so much more to do to make sure we get there fairly, respecting human rights and with as little damage as possible.


ADAPTATION
For the first time the international community has acknowledged that our collective level of effort to reduce carbon pollution is directly linked to the level of effort we must make - to adapt, connecting the new adaptation goal to the temperature limit. The hard work must now begin to create resilient  communities in all corners of the globe and governments must be held to the commitments they have made here in Paris, including scaling up efforts to adapt over time.


LOSS AND DAMAGE
With climate impacts already causing irreversible death and destruction, it is timely that the new UN climate agreement has acknowledged that there must be a way to deal with this loss and damage as a fundamental element of a global climate deal.  There is much work to be done in the days ahead in order to protect the most vulnerable as debates continue over what this element should and shouldn’t include.


WORKSTREAM TWO
Before the Paris agreement comes into effect in 2020, countries need to take advantage of the plunging price of renewable energy, harness the benefits of climate action for their people and their economies, and scale up their commitments to continue to keep us on a safe climate pathway. The agreement struck today has sketched out some plans that may see poorer countries get access to best practice renewable energy policies, but more needs to be done at the highest political levels to ensure action is scaled up.


FINANCE
We always knew financial support for poorer countries to take their own climate action and adapt to impacts would be a sticking point to ensuring a fair and ambitious Paris agreement. Governments have agreed that in 2025 they will set a new, higher target for financial support from the $100 billion a year floor, with richer countries obliged to contribute, but more will need to be done to ensure that communities have the support they need to adapt to the worsening impacts of climate change.

LONG TERM GOAL
The Paris Agreement has spelled out a science based long-term emissions reductions target, which aims to peak global greenhouse gas emissions as soon as possible and get to zero emissions thereafter, countries have added a practical roadmap keep warming within the 1.5C limit. Acting as a north star for our efforts, the goal is a powerful signal that the fossil fuel era is ending, and that the irreversible, beneficial transition to 100% renewable energy, which is being demanded by citizens the world over, will pick up speed.

That the Paris Climate Agreement is as strong as it is, is testament to the growing numbers of people from all walks of life - the young, faith leaders, frontline elders, unionists and scientists - who are driving climate action. Directly before the Paris Climate Summit, the world’s biggest climatemarches took place with over 700,000 taking to the streets. The signatures of over 6 million were handed to the UN. As we stand in solidarity with most vulnerable people affected by climate change, our movement will grow in strength and diversity as climate change affects us all, and our access to life’s basics, especially for the poorest. 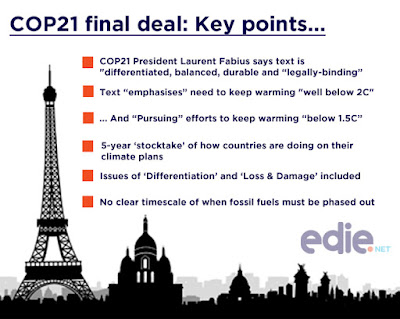 So where do we go from here?

We will not rest. In the coming year, we will hold governments and corporations accountable as we work to make the spirit of the agreement part of the fiber of our countries. All eyes are now on nations to use the commitments enshrined in the Paris agreement to urgently speed up the ongoing energy transition at a national level, and come back to the table and increase their climate commitments as soon as possible. Scaling up action now will mean we’re all better off. That means:

Richer governments must now ramp up support to poorer countries adapting to the climate impacts that cannot be avoided and find concrete solutions for the most vulnerable communities. Responding to climate change is not just about reducing emissions, it is about ensuring the vulnerable are protected, and that we are creating a more fair and just world.