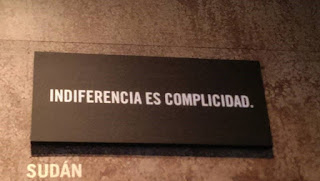 The Justice, Peace, and Integrity of Creation Committee Is Challenged
By Sr. Martha Ann Kirk

Jennifer Reyes Lay, the Associate Director of Incarnate Word Congregation’s Justice, Peace, and Integrity of Creation Office noted, “In the Museum of Memory and Tolerance, in each exhibit they had a tri-fold of people who were perpetrators of the genocide, those who were indifferent and allowed it to continue, and those who were committed to doing their part to help those targeted and stop the genocide.  This was a powerful reminder that like a quote on the wall of the museum, indifference is complicity.”

She continued, “I see this connecting to the work of the JPIC Committee and Office in that we are helping the Congregation to not be complicit through indifference in the face of injustice, but rather to commit ourselves to doing all we can to help those suffering and prevent future injustice.  If we do nothing and stay silent, we are actually actively supporting the injustice occurring.  So it is our work to speak out, to take action, and to share what is going on with one another and the world.” 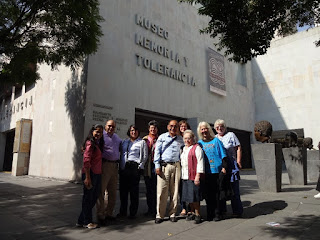 On the Feast of St. Francis of Assisi, 2015, who was open-hearted to lepers, to a wolf, and to the Muslim ruler while others hated or excluded them, the Justice, Peace, and Integrity of Creation International Committee visited the “Museum of Memory and Tolerance” in Mexico City http://www.myt.org.mx/    http://www.archdaily.com/154543/museum-of-memory-and-tolerance-arditti-rdt-architects across from the monument to Benito Juarez.

When the museum opened in 2010, an article explained, “The 75,300-square-foot (7,000-square-meter) museum, a decade in the making, is the dream of Sharon Zaga, whose grandmother moved to Mexico from Czechoslovakia as World War II broke out, and whose great-aunt survived Auschwitz.  At 15, she declared during a career day at school that she would build a museum dedicated to the Holocaust and began pursuing that goal in her early 20s, taking university courses on genocide and making connections among some 250 Holocaust survivors in Mexico and their descendants. In 1999, a group founded a nonprofit organization - Memoria y Tolerancia (Memory and Tolerance) - which began collecting donations and material for the museum, whose funding almost entirely comes from private individuals, many of them Jewish.” (from  http://www.sfgate.com/news/article/Holocaust-museum-in-Mexico-promotes-tolerance-3249553.php) 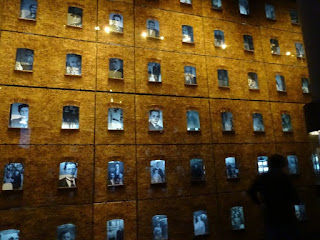 Visitors begin on the upper level in front of a glass wall which reveals a beautiful view of the Palace of Fine Arts, the Secretary of Foreign Affairs, and the Plaza Juarez Square. People move from this bright light into dark galleries with dark chapters of human history. A wall has “windows” with pictures of hundreds of Jews killed among them the girl Ann Frank. Pictures, words, films, and objects tell the story of the Nazi Holocaust, then other acts of atrocity in Armenia, Former Yugoslavia (Srebrenica), Rwanda, Guatemala, Cambodia and Darfur.
Sister Mary Kay Mckenzie sadly said, “The amount of killing depicted in the Memory section - the genocides of the last century - is overwhelming.  How can here be so much hate over religion or nationality when we all are so much alike?  Why do differences engender so much fear. This makes me reflect on the fact that there are so many ways to kill, and I am not always innocent.  It is possible to kill a person's spirit by the way I treat that person; it is also possible for me/us to enhance a person's spirit.  Which way will I choose to live?”

Each section of the museum raised questions in regard to what could have been done then. The Nazis built prejudices on theories of racial inferiority, some people are “less human.” In Kosovo in 1999, at least 6,000, mostly Muslims, were killed by the Serbian Christians. Mexico gave refugee to some of the refugees from this.  Sadly, in Rawanda many people were massacred in churches where they had come to find safety. The section on Darfur and Sudan asked what can be done now in the on-going violence. 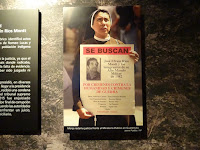 The museum has a very informative and moving section about the 36 year civil war in Guatemala.  1.500,000 persons were displaced in the country and about 150,000 fled to neighboring Mexico. About 40,000 people “disappeared” under the repressive government. Eventually 200,000 people were killed. Both during violence and since then many church workers have tried to speak for the vulnerable.

Sr. Maria Marquez Fuentes said, “My ongoing question in the museum was how did it come to this?  My heart was hurting for all of the deaths caused by human beings, and not human beings that are all that different from me.  I felt very called to work for peace and reconciliation in society where I am.  There was a growing desire inside me to ask for forgiveness, to find hope, to accompany those who feel alone, to be light in the darkness, to be peace in times of war. 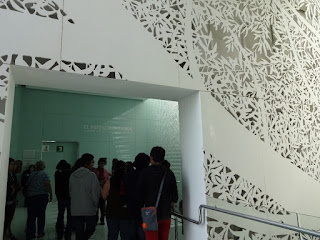 People walk out of the dark rooms of the museum to see a the “Children’s Memorial” with 20,000 small glass balls like a cascade of “tears” with which remembers the two million children who have been killed in genocides. The memorial is an invitation to tolerance, respect, and future coexistence among all people. The memorial is covered with a design of olive trees, a symbol of peace.
Agustin Rios Velez said in reflection, “My visit to the Museum was a mixture of diverse feelings: pain, sadness, courage, but also of the need to think about what am I doing to prevent another genocide or crime against humanity.  I need to act so that there isn’t indifference, discrimination, and defend the Human Rights of everyone.”
Then visitors enter rooms that educate on what is needed for tolerance and respect. Genocides begin in simple prejudices.  Do I allow prejudice or contribute to prejudice in my daily life?  Nineteen exhibits halls help people recognize and understand more about stereotypes, prejudices, discrimination, hate and violence. 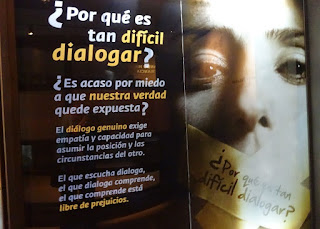 One of the most important things for us to learn and teach the next generation is dialogue.  “Why is it so difficult to dialogue?”  Genuine dialogue calls for empathy and compassion which enters into the position and circumstances of the other. Can one listen in the midst of social, cultural and religious differences?  How to we learn to contribute our point of view and deeply listen to other points of view?

The uniqueness of  finger prints is used in both the logo of the museum and in a large mural.  No one else on the whole earth has the same finger prints as me. Diversity is a profound and beautiful reality.  Our uniqueness invites profound reverence and respect for each human being.
Large room have pictures of indegenous people of Mexico celebrating them and their cultures. Maps help to understand the many peoples and languages that make up the one country. The diverstiy is both an opportunity and a challenge.
Sr. Katty Huanuco, the Director of  the JPIC Office, wrote, “Walking through the Museum of Memory and Tolerance touched my heart---both the hatred and unexplained exclusion of others. The sad thing is still happening. Women, indigenous people, children and older people strongly suffer from the scourge of indifference. And so, it still hurts. But let us remember and recognize the martyrs who have been committed to life. There is hope.” Sr. Katty had initiated going to the museum as part of our JPIC meeting and she noted, “We look, listen and make it our work to respond to these clamors. We want to be a Samaritan Congregation and respond, not to speed back and forth ignoring the needs.” 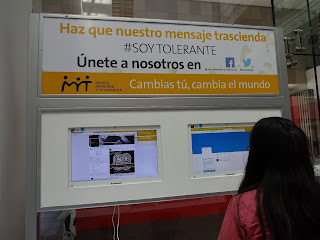 One room gave examples of  how technology and media can spread hatred and violence.  In contrast, the museum has social media campaigns to promote tolerance.
Also “The Universal Declaration of Human Rights,” those ideals laid out after the Second World War, is featured.

A section of the museum has many activities and materials for children to learn that each person is a potential friend. Our differences can nake societies richer, and cooperation is better than competition.  Killing is not admirable. 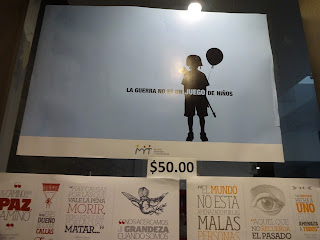 The museum shop had wisdom that visitors could take home, for example, a poster showing a little boy playing a soldier and holding a toy gun. War is not a game for children. Toy guns and other things of war lead children to think that killing others is fun. 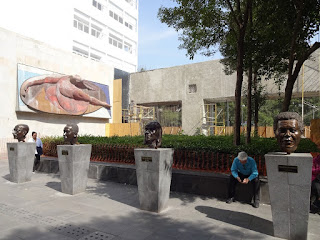 Stopping genocides starts with transforming the violence within each of our hearts and lovinging and courageously inviting others, both children and global powers to put down the guns. “Hatred can never drive out hatred, only love can do that,” said Dr. Martin Luther King, Jr. who is depicted in front of the museum. “Be the change that you want to see,” said Mahatma Gandhi who is also there. Mother Teresa of Calcutta, shown in another one of the sculptures said, ““Do not wait for leaders; do it alone, person to person.” Nelson Mandela forgave the people who had imprisoned him for 27 years freeing himself so that he could work side by side with them to build together one unified society.
Publicado por Oficina JPIC CCVI en 8:51 AM