SUPPORT FOR SYRIAN REFUGEES
As the Leadership Conference of Women Religious remind us in their recent press statement, "We are witnessing the largest refugee crisis since the Second World War. More than 4 million Syrians have fled violence in their homeland and 12 million more are displaced internally. Syrian refugees are fleeing exactly the kind of terror that we have witnessed in these past few weeks. More than 250,000 Syrians have lost their lives, many more have lost family, home, and community.  At a time when the world is in desperate need of humanitarian relief, some are calling for suspension of the US refugee resettlement program, an end to funding for Syrians, or a rationing of mercy based on religious creed. Such restrictions violate the tenets of our faith and the principles of our nation."

We must stand up to the fear-mongering and speak out in love for those fleeing violence.  As we enter into the Advent season all Christians would do well to remember the story of our own humble beginnings, of a pregnant middle eastern woman seeking shelter in a foreign land as she prepares to give birth, and then fleeing death threats once she has brought her baby boy into the world.  Our challenge today is will we welcome the stranger, the children of God, who continue to seek safety and shelter, or will we turn our backs and say they not welcome here?  As Matthew 25:40 reminds us, "Truly I tell you, whatever you did for one of the least of these brothers and sisters of mine, you did for me." 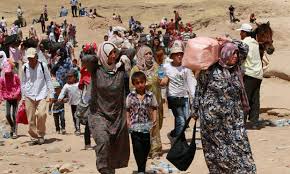 NO HUMAN BEING IS ILLEGAL

On a scorching day in May 2010, thousands of Latinos and immigration activists marched through the streets of downtown Phoenix in a mighty protest against SB1070, the so-called “show me your papers” law. Among the sea of protest signs was one with a more universal message: “No human being is illegal.”

In the years since, a linguistic dispute has welled up on the periphery of the highly charged debate over immigration reform – how to refer to the nearly 11 million people living in the US without legal residency?
“We don’t call pedestrians who cross in the middle of the road illegal pedestrians,” said Otto Santa Ana, a linguist and professor in UCLA’s Department of Chicana/o Studies. “A kid who skips school to go to Disneyland is not an illegal student. And yet that’s a sort of parallel.”

Santa Ana is among many linguists who argue that the phrase “illegal immigrants” is neither “accurate nor neutral”. Other law-breakers are not referred to as illegal, making immigrants an outlier in the naming system, he said.

PRAYER:  God of all people, grant us vision to see your presence in our midst, especially in our immigrant sisters and brothers.  Give us courage to open the door to our neighbors and grace to build a society of justice.  Strengthen us to welcome those from other lands, cultures, religions, that we may live in human solidarity and in hope.  Amen
Publicado por Oficina JPIC CCVI en 8:45 AM